I didn’t think I would make this project.

This project was more outside my comfort zone then I had ever ventured before.  I had made community based art projects before, but this one, took me by surprise.

Miriam Grottanneli, the director of Siena Art Institute and I along with Bik Van Der Pol began a discussion in January 2019 about Racconti del Margini, “tales from the margin”, as a conceptual kernel to launch a semester’s worth of projects for students and artists alike.  The focus was simple, through the lens of community based art, in a city such as Siena where the majority of attention is given to the Palio, Contrada, and tourism,

what else is going on in Siena?  What stories remain to be told? 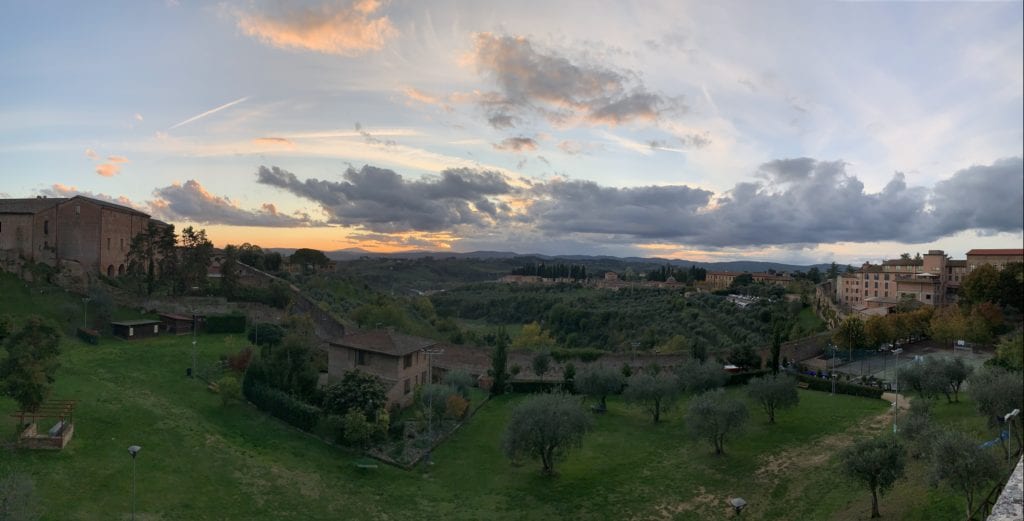 From the beginning of the conversation, I focused on how we could bring community together to tell stories.  Telling stories breaks down invisible barriers that separate our communities.

More importantly, I did not want my project to be didactic or even pedantic, I wanted people to spark their own organic cross-community relationships.

After several initial ideas, the windchimes seemed the best idea, one where people could still have the cloak of anonymity but also be invited to share their individuality.   The natural playfulness also seemed to be a perfect fit.  I was not prepared for the emotional impact the project would have on myself and others. 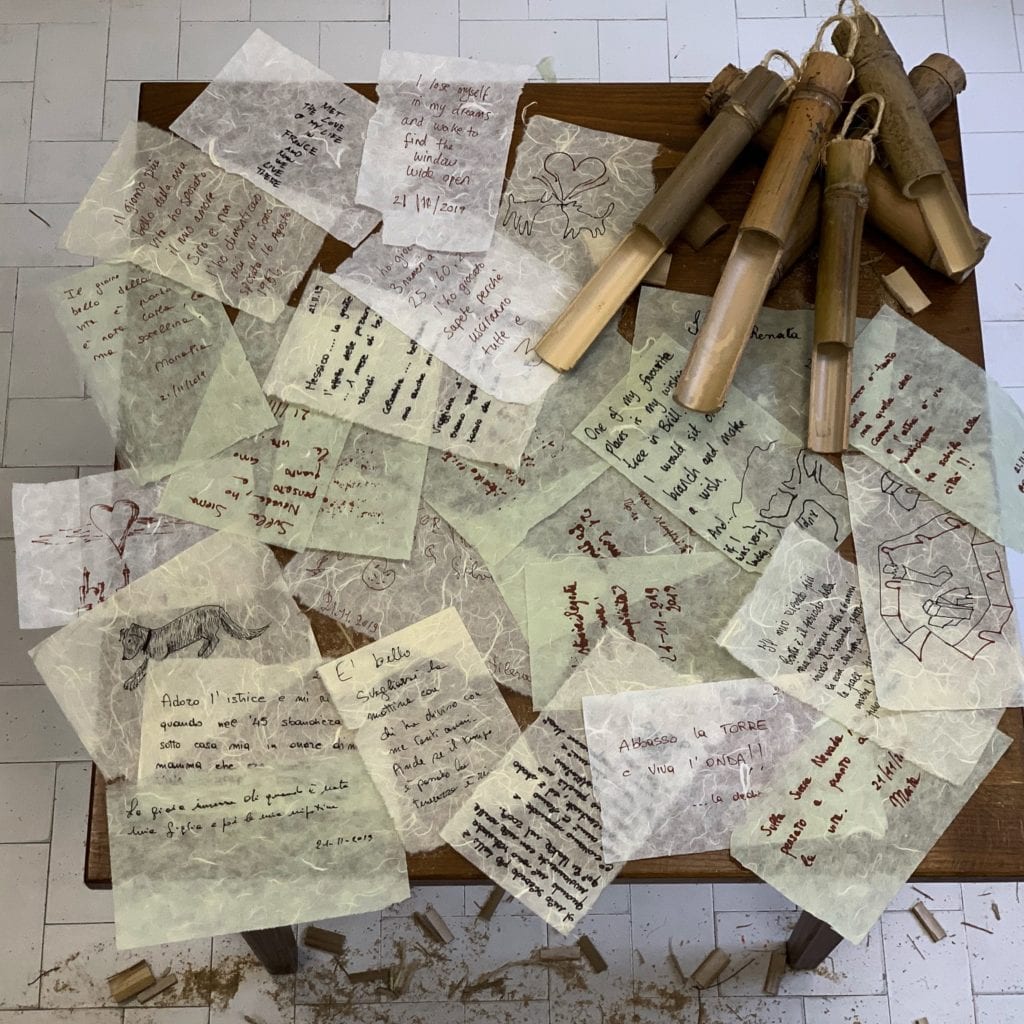 I designed a community based art project where members of micro-communities recorded a memory, memento, or story on rice paper.  They made a drawing, wrote a story, or a little bit of both, it was up to each participant.  They gave me these recordings and I laminated them on to windchimes that I made from locally sourced sustainable and renewable bamboo.  Then, I took these windchimes and installed them in an outdoor amphitheater of the Santa Chiara Fab Lab of the University of Siena.

To underline a bit, I was personally handling stories of lost love, friendship, death, joy, and happiness from total strangers.  The experience was raw but deeply enriched my soul.

I worked with a retirement home, an adult rehabilitation center, and local highschoolers.   37 people including myself recorded and donated a memory to this project. Now, with a little wind, their voices are sent on the air throughout the city of Siena.   The installation at Santa Chiara along with a companion exhibit of previous works was unveiled the 13th of December 2019 and will be on display until the end of February 2020. If you happen to be in Siena please be my guest and visit the exhibition.

Below is a mini-documentary about the project produced by the team at Siena Art.

I was humbled and emotionally moved by the response from the community in making it and in the feedback when we unveiled it.

People want to be heard.

They want to share their stories. There is a lot of lonely people out there that don’t feel appreciated. 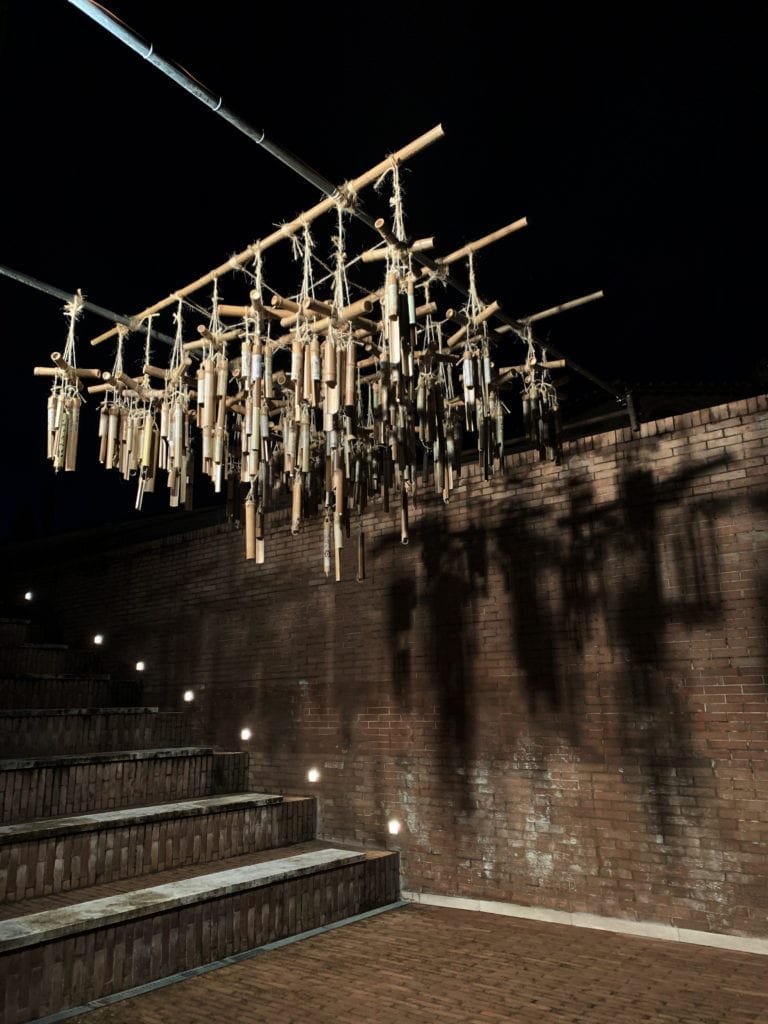 I am honored to continue this project,

I’m thankful that I’ve done another version in Quimper France, and hope to do so in other countries and cities, and we are hoping to do more workshops and more installations in Siena and possibly elsewhere.   I’ve purposefully designed the project to be “open-source” and only ask that the format of the project remain the same. It’s important to the concept that we make a connection between the individual and the collective…

the way we all feel, sometimes, lost in the crowd.

There are many interpretations of the project and I have treasured the dialog deeply.   The project uses ecological materials and methods and is directly engaging social and economical conversation.   I’m quite impressed by the tangential subjects that have come up in conversation, Overgrowth, noise pollution, and practical applied sustainability.  In the conversations I have with people it seems that we are trying to see what the future will look like, and if we can change now, we can build the future we want to see.

With this project we hope they we have created a community meeting point as well as a prototype for future iterations.  I will continue to update this post as the project develops.  For now, here are a few links, one to Siena Art Insitute, my project bio on Siena Art’s page, and several news articles that have come out so far, here at Il Cittadino, here at Siena Free, and in La Nazione, more to come and I’ll update this post frequently. 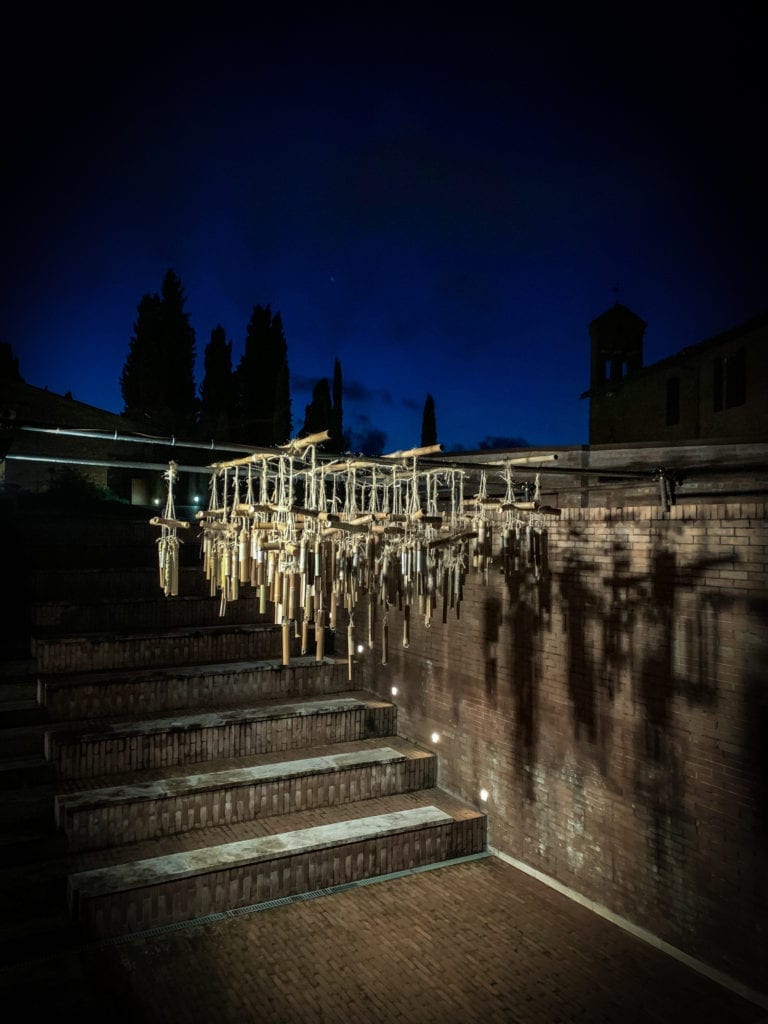 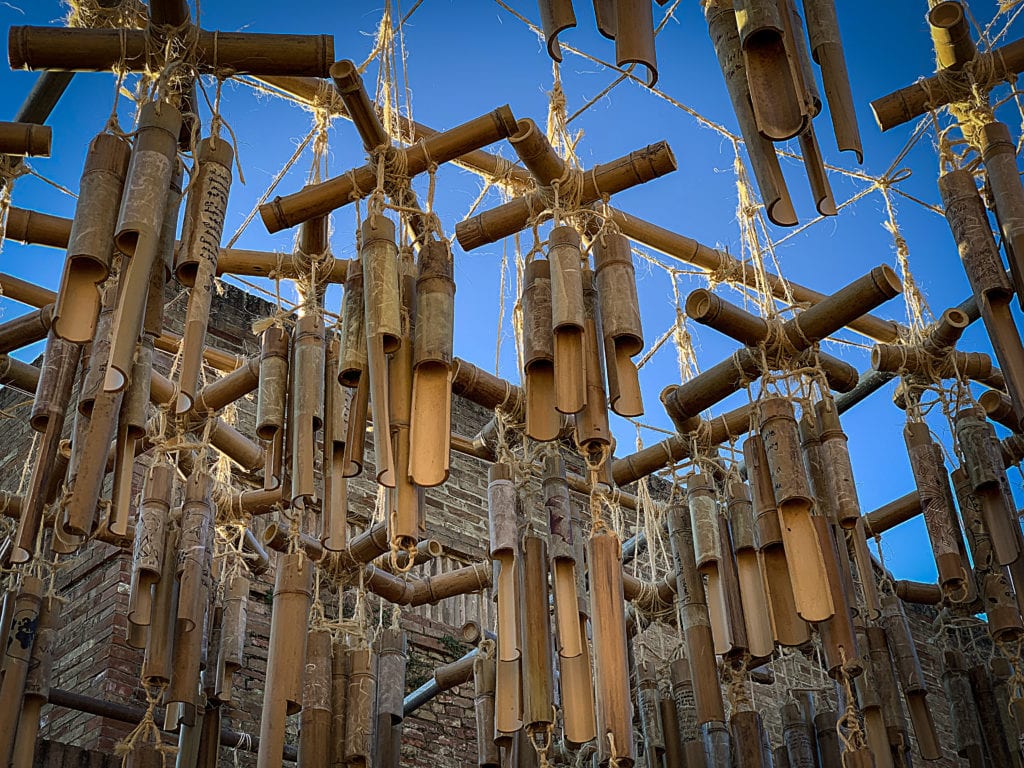 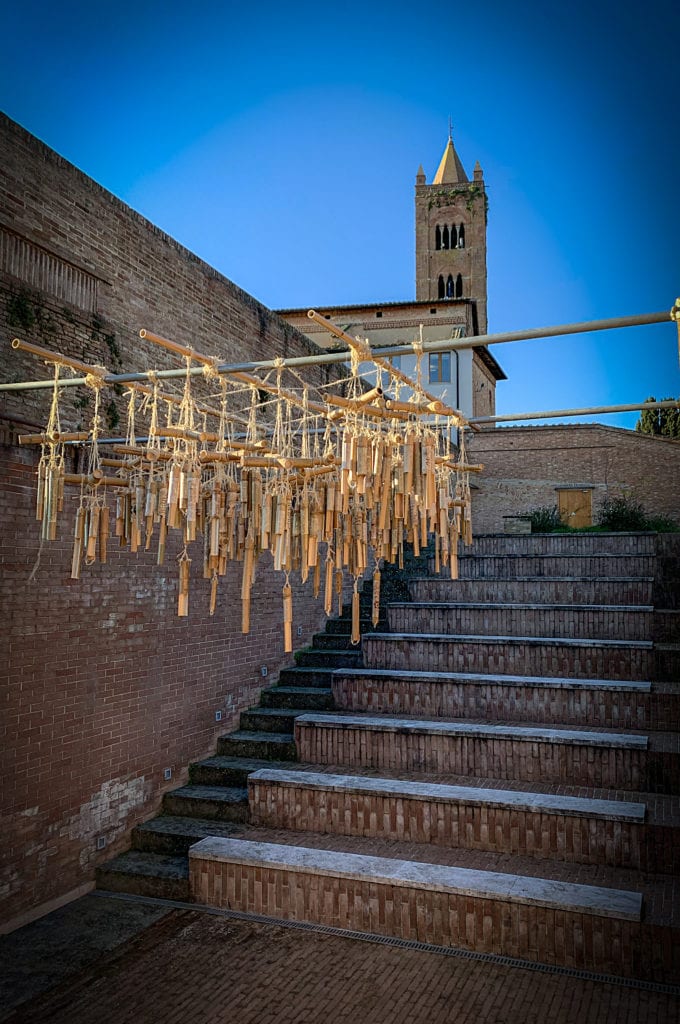 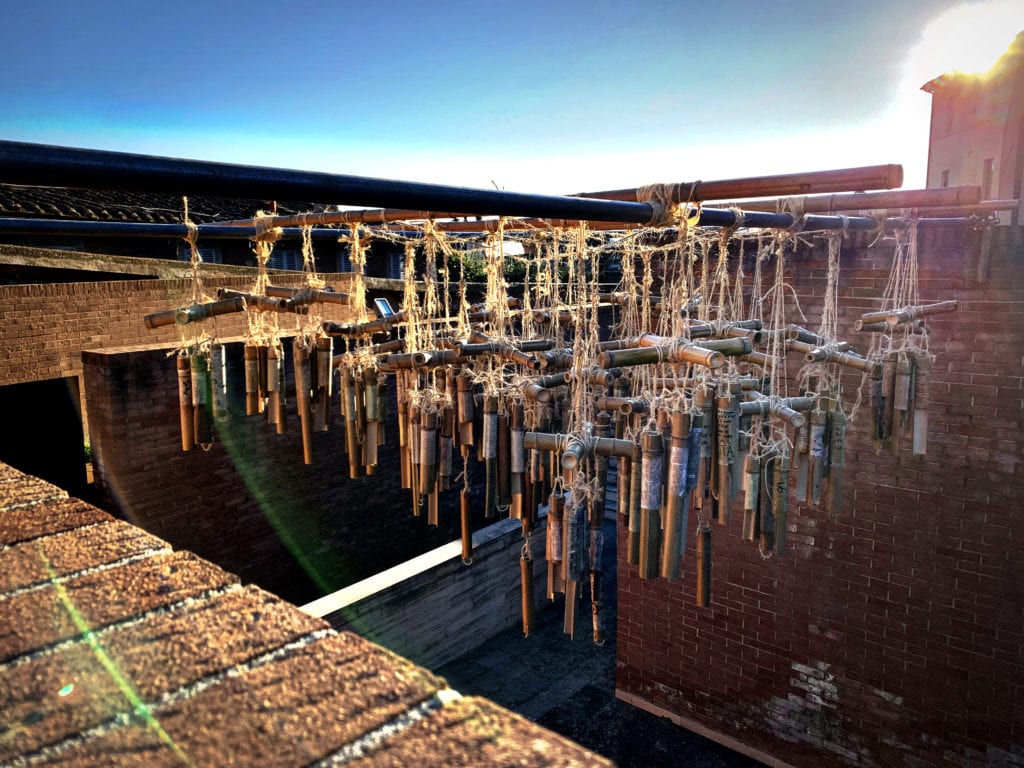