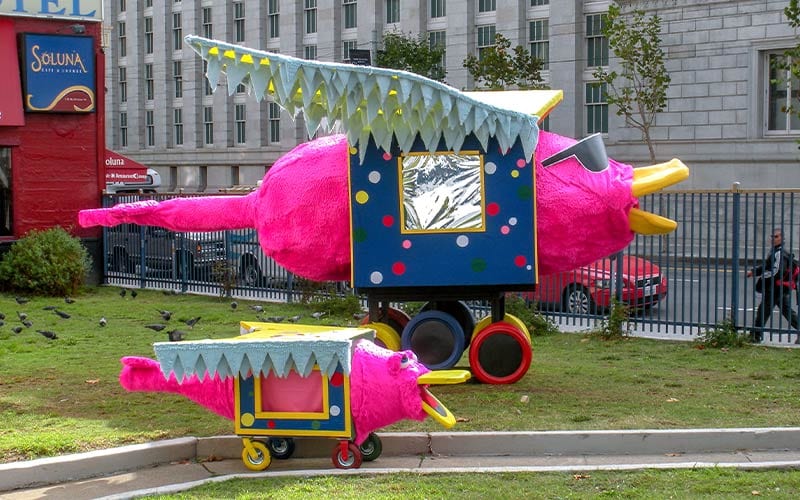 Wonderland was a multi-discipline artist exhibition spanning 10 collaborative artist groups composed of over 40 artists participating under the curatorial direction of Lance Fung, all site-specific, site-inspired, and site-informed, in the heart of San Francisco’s Tenderloin district. 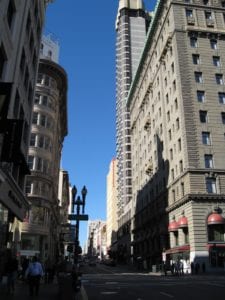 I was the project director for this massive project as well as being part of the CENTS collaborative team. What began as cocktail note conversations while I was interning with Lance during his Lucky Number Seven Biennial at Site Santa Fe, and then migrated into a graduate level course, where I was also his teaching assistant, we began the project in 2008 and opened to the public in 2009 and received a lot of press (link). Some of the artworks and partnerships still exist today, and the entirety is a lesson to community-engaged art making a difference socially, politically, and economically.

Each collaborative group took on their own research and development of their project with feedback from Lance and me. Our goal was that the project have strong community connections. We pushed the artists to stay clear of form and content in early development, and instead focus on research and concepts for as long as developmentally possible. Given the yearlong development, there was huge turnover in the artist roster as many artists couldn’t commit to the process for a variety of reasons, but a core group composed mostly of Lance’s graduate students and handpicked professional artists kept the project going.

It was all grass roots. The students did the web design, graphic design, and marketing. They also did a lot of the community organization and outreach. Lance and I stayed on the organizational side of things, securing fiscal sponsorship from the North of Market Tenderloin Community Benefit District which was nexus of businesses invested in improving the lives of all residents of the Tenderloin District. We maintained a liaison with the San Francisco Mayor’s office as well as the San Francisco Arts Commission, even though no official sponsorship or partnership existed. We truly kept it a community project by partnering with local businesses to secure storefronts and other alternative venues for the artists to create their installations.

The CENTS collaborative team, was composed of myself, Barry Beach, Colby Claycomb, Kit Rosenberg, and Izumi Yokoyama.  We researched quite heavily the neighborhood, the sites, and sounds, until we stumbled upon a fact.  The Tenderloin has a disproportionately high number of children compared to other areas of San Francisco.  This fact, combined with the knowledge that the Tenderloin is also home to shelters, addiction centers, clinics, and food kitchens, immediately inspired us.  We knew right away that we wanted to work with the kids, so we organized a few workshops with the Boys&Girls Club to generate drawings that would become material for our project. 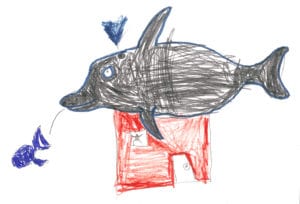 In the workshops, the only prompt we gave to the kids was to draw a house that moves, and we could not believe the range of responses.  From there, we distilled the common elements in all the drawings and then used that as a design matrix to build the sculpture.  Our purpose was inspired by how the Tenderloin was a home for many, a home away from home, and a place for those without a home.  Home was the connecting concept uniting all individuals.  If the kids drew a house that moves, then we could reach across the sociological divide with humor, whimsy, and joy. 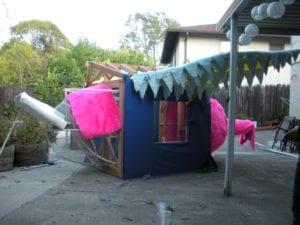 We also made a mini sculpture, that we took around the community and continued doing workshops on the theme.  The project went on to have two follow up exhibitions before it was responsibly decommissioned and recycled. 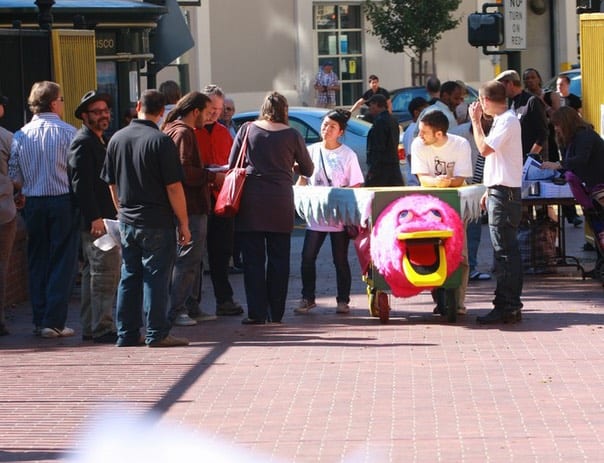