There and Back Again…Cradle to Cradle, Part 1 of 2 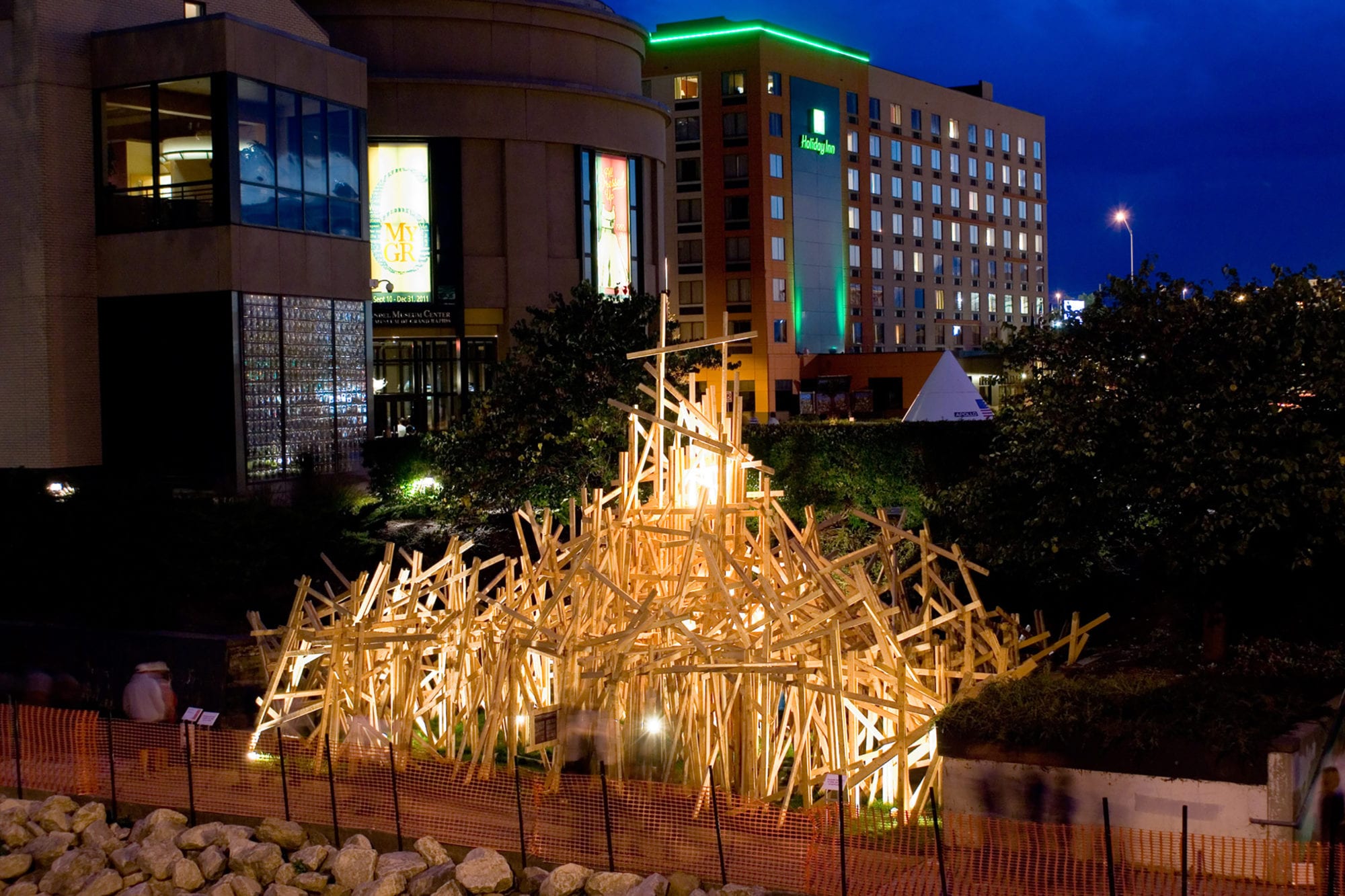 I write in the midst of a pandemic, COVID-19, or Cornoavirus, that has shutdown our global economy, threatened the egos of world leaders, tragically altered or ended the lives of thousands and is predicted to affect many more.  At this writing, more than 2.58 million cases worldwide have been reported, many question what will come of us next.

These beginning and end feelings remind me of a project I did in 2011, Alpha Omega Monument. In 2011, we had just climbed out from the 2008 recession and many of us were wondering if the world was going to change or go back to normal.  Now, I hear echos of 2008-2011 conversations in the questions being asked today in 2020.

What about the art world?  What does a ‘shelter at home’ policy do to consumerism, what does post-consumerism mean to the art world?  Can we ZOOM an art fair?  Many of us have already shifted to dialog based art, or are making art that is less about commodity, and more about provoking dialog.  Art for many has become an ‘icebreaker’, a beginning to a conversation.  The aesthetic of art has changed from no longer being just the destination, it is now, only the beginning.

Thinking about post-commodity economies as a designer, a creative, and a producer, I’m awestruck at the ripple effects these changes will have on being an artist.  I’m reminded by what Steve Howard, IKEA’s Chief Sustainability Officer said about Peak Stuff in a 2016 NPR interview here, …I’ve provided the key quote below. 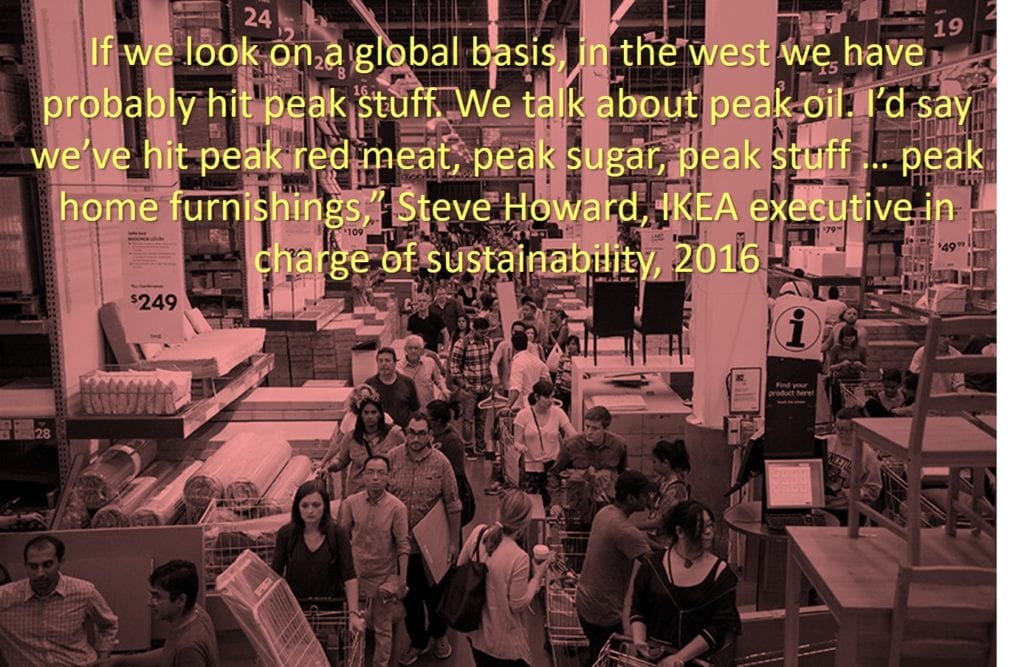 Even before I knew of Steve Howard, I’ve long since adapted my practice and formalized my commitment to ‘up-cycling’ and other strategies.  It was after finishing grad school in 2009 when I discovered William McDonough and his ‘Cradle to Cradle‘ ethos.  The effect it had on me was monumental.

I had been deeply researching ‘Cradle to Cradle’ methodology and wanted to apply it through my eco-art lens.   Cradle to Cradle design methodology was an Epiphany for me.  In short, the ethos can be summarized as thinking about the end before the beginning.  Whether you are designing a sculpture or a car, a house, or a boat, a magazine, or a couch, the materials, production methods, and resources used all have to be considered conceptually, before physical production, to determine if they are sustainable or not.

Most importantly a design timeline for the product is determined that allows for stipulating material strategies from beginning to the end of its life cycle.  What happens when the car is dead, where do the materials go?  In essence, you have designers choosing materials at the beginning of design based on how recyclable those materials are. 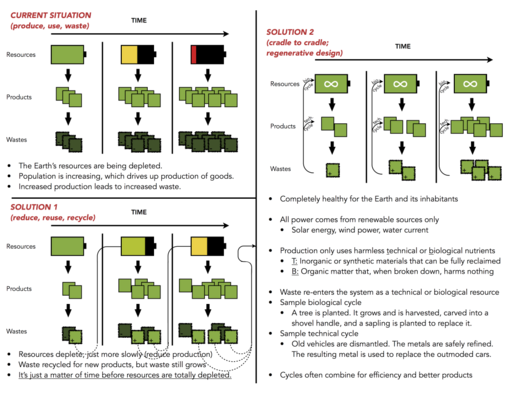 In 2011, I also wanted to push the genres of eco-art and environmental art into more contemporary themes by speaking to modern issues, economics, resources, and a less cliché manner of ‘up-cycling’…

Back then in 2011, my friend Al Farrow recommended I try for ArtPrize festival in Grand Rapids, Michigan.  ArtPrize is a unique festival were the public is the jury.  Each piece of art, installation, sculpture, drawing, or painting is given a unique number, and the public can vote by SMS text message.  The exhibition partners with a wide number of venues and artists typically self-fund or crowd-fund their projects.  I was rather inspired by this democratic approach to curating and selection and I thought that environmental art could have a go at it.

I designed my project for ArtPrize guaranteeing all materials would be re-used at the end of the project.  I knew the exhibition would be temporary and I knew I was going to make something monumental that would not be for sale.  So it had to be demolished just as much as it needed to be made.  While researching the community of Grand Rapids, I learned that there was a huge history of furniture making, housing construction, and millwork.  As a consequence of climate change, over-logging, and the 2008 crash, much of this economy had in effect, evaporated. 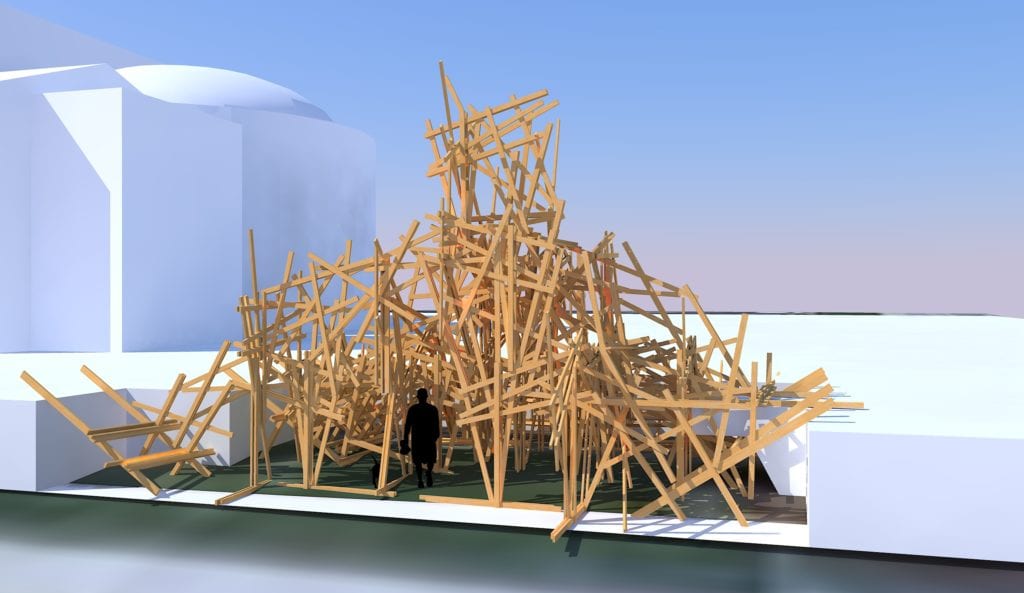 With this in mind, I set about to crowdfund the budget necessary and design the actual project.  I knew I had a fixed time-frame for development, funding, and fabrication, so I not only designed the entire project in Sketchup, but I also ‘rehearsed’ construction of the project using the CAD software.  In the middle of this process, I reached out to a local Habitat For Humanity chapter and begin a collaboration with them, where I promised that they could have all of the 2 units of lumber from the project in exchange for their community of labor to de-install the project at the end of exhibition.

Habitat for Humanity agreed, and we were off and running.  When they decommissioned the sculpture, I’m told the materials easily made possible the construction of a 2 bedroom house.

I designed the project to be completely composed of 8’ long 2×4’s the common unit of construction in the USA.  I also designed it so no cuts were made.  Only drill holes, and an average of 3 per board.  In this way, the structural integrity of each board was not sacrificed.   As much as the piece looks chaotic, the basic module of construction was inspired by scaffolding work I’d seen in Cambodia mixed with my design guideline of no cuts and minimal holes. 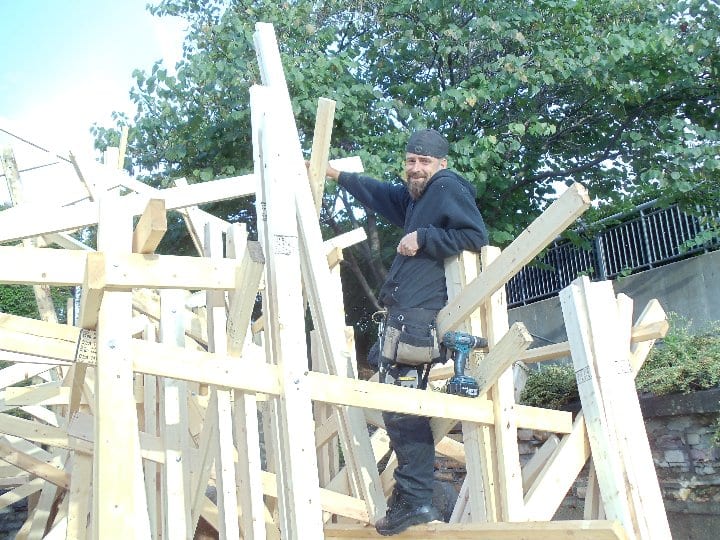 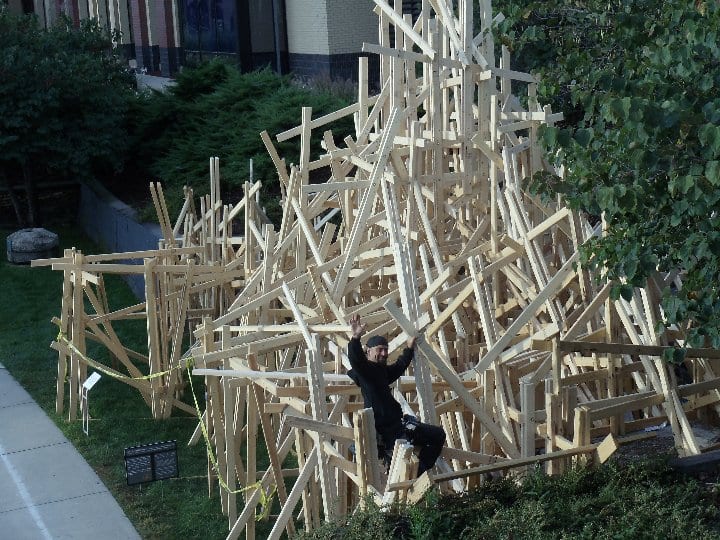 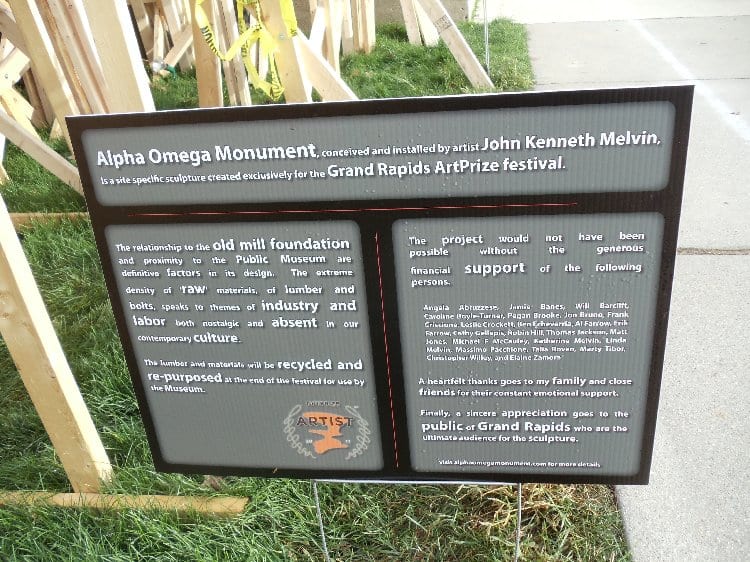 The project was featured on a tool demo website, and a quick video highlighting the community de-installation of the project can be found online (link coming).  I’ve made a stand alone website as there is more information about the project from start to finish, click here, and you’ll find it.

We had a lot of press for which I’m very thankful, including a feature in “ArtPrize 2011 begins”, Wood TV, Sept. 22, 2011.  The best part of the festival was to be able to talk to the public about how the entire project would be recycled.  Here’s snapshot of the front page of the Detroit News that the project got featured on. 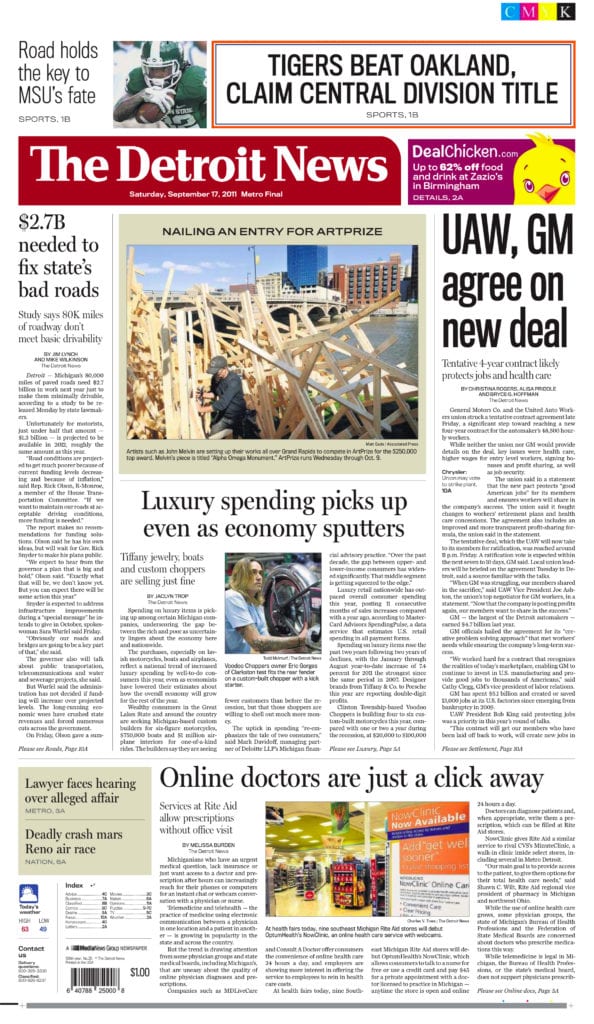 Its incredibly interesting to write about this project from 2011 now in 2020.  Then, we only knew predictions, climate change, recession, peak oil, and other predictions seemed to be in the news daily.   Granted there were visible changes in the environment, changes in the economy, and changes in culture that could all be connected to our interdependence on environmental health.   But we were not universally listening then.  As a species, we couldn’t see the interdependence of ecosystem health and human global economics.  Now, with the pandemic, I really wonder if the scientists who state we can’t go back to normal, will be listened to.  The test is on us.  If we can learn from our past to inform our future, we will be alright.  I think we can.

I didn’t know it at the time, but the influence of the cradle to cradle philosophy would have a lasting impact on me, and would come back to inspire a very similar project when I was asked to come to the Bascom in Highlands, North Carolina.  That story is on part 2 of this post.