In 2010, I was asked to participate in GogolFest, an arts festival in Kiev Ukraine. Curator, Katya Bochavar, asked me to create an installation to round out the broad selection of artists she had picked for that year’s edition. The US Embassy helped with funding and transport, and I produced the project in about 4 weeks of physical production after about 2 months of intense computer design.

When I first received the invite, I admit I was in a bit of a post-graduate-school-exhibition-whirlwind fog, and almost ignored it. Thankfully, a friend, Kate Sutton, an ArtForum Contributor, politely reminded me to follow up. I had just finished a photography research trip to Southeast Asia and was completely enamoured with alternative building strategies, and renewable technologies. I was also very mindful of images of war, security, and climate change.

When I was asked to create the installation, devastating forest fires near Moscow had completely shrouded the city in dense toxic smog. Climate Change was already a buzzword, and many articles were contextualizing the fires around human activity, Anthropocene, and insect infestation as a result of climate change. I too, was ever more aware of it. Often, I’m asked to make temporary installations, and typically the budget can only afford wood products. As part of this process, I’ve become aware of lumber practices worldwide. In the Northern Hemisphere, most commercial grade lumber is pine, and nearly all is industrially produced. Virgin forests are protected in most countries, meaning most timber harvested is at best 2nd growth, and much more likely, its from tree farms where multiple generations of timber have been raised and cut. This can most easily be identified at the consumer level by noticing the thickness of tree rings in the cut lumber.

A consequence of this process, an extractive economy, not renewable as some would say, is the ground is stripped of nutrients, the trees are fed petroleum-based fertilizers to accelerate growth, no jobs of scale are created as mechanization of timber harvesting means a skeleton crew of 2 or 3 laborers can clear acres in days, and habitat for wildlife is usurped for greed. On a consumer level this lumber is low grade, enough for construction but not for cabinetry or other fine work. In fact, one of the many reasons plywood and laminates are so popular in consumer applications is largely do to this feedback loop of industrialized tree farming. Low grade wood needs engineering (glue) to meet standards that were designed with virgin growth timber in mind, but the more trees we cut for construction, the lower quality of tree we can grow in order to meet the demand. Art for the record, consumes such an infinitesimally small amount of lumber compared to construction to be a nonstarter argument.

Forest fires are terrible tragedies to life, human, plant, and animal, and should never be thought of lightly. The fires near Moscow in 2010 traumatically effected the lives of millions. I wanted to make a memorial, a monument, and a question for the public to consider. Russia is not Ukraine, and I was deeply aware of the friction inside of Ukraine as it struggled to shake off its former oppressor. I was also sensitive to the changes Ukraine was undergoing, as even then the rumblings of civil unrest were apparent. What impact was climate change having on our lives? How is our monumental ecological experiment of industrializing nature benefiting us? How is it not?

The response was amazing and exhilarating. The audience at GogolFest were mostly in their twenties, and once they discovered that my project was an eco-art project, they were enthralled. Many told me that as young people in Kiev, they were starving for dialog on sustainability, climate change, environmentalism, and other progressive topics of conversation.

The title of the piece is tongue-in-cheek arithmetic intended to make the audience think a bit more about the scale of production, consumer demand, and supply in extractive economies. It’s also a fairly precise calculation as to the total linear amount of wood used in the project, as well as an estimate of the piece count. Each tri-cross section, originally referred to as a Yugoslavian Anti-Tank barrier in the WW2 era, is composed of three pieces of wood, each 50cm long. About 4000 pieces were used, and as memory serves, we ordered about 2000 meters or 2km of material. The wood was charred by scorching each assembled section over a fire made from the scrap cut-offs from fabrication. I had a crew of about 6 local Ukrainian young men helping me on the project. The site, Dochenyko Film Studios, was a historical film studio where a lot of Bolshevik and Soviet era films were made in the past. It was the site for several famous films, and now serves as a place for tech start-ups, art collectives, and small film related businesses. GogolFest is a festival dedicated to Gogol a writer popular with the alternative arts scene, and the festival was composed of 7 smaller festivals: visual art, dance, theater, animation, film, music, and literature.
I was invited back in 2015 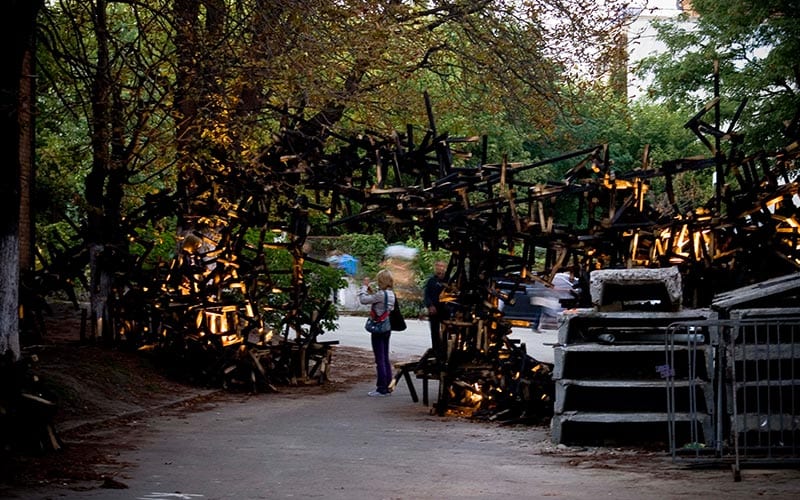 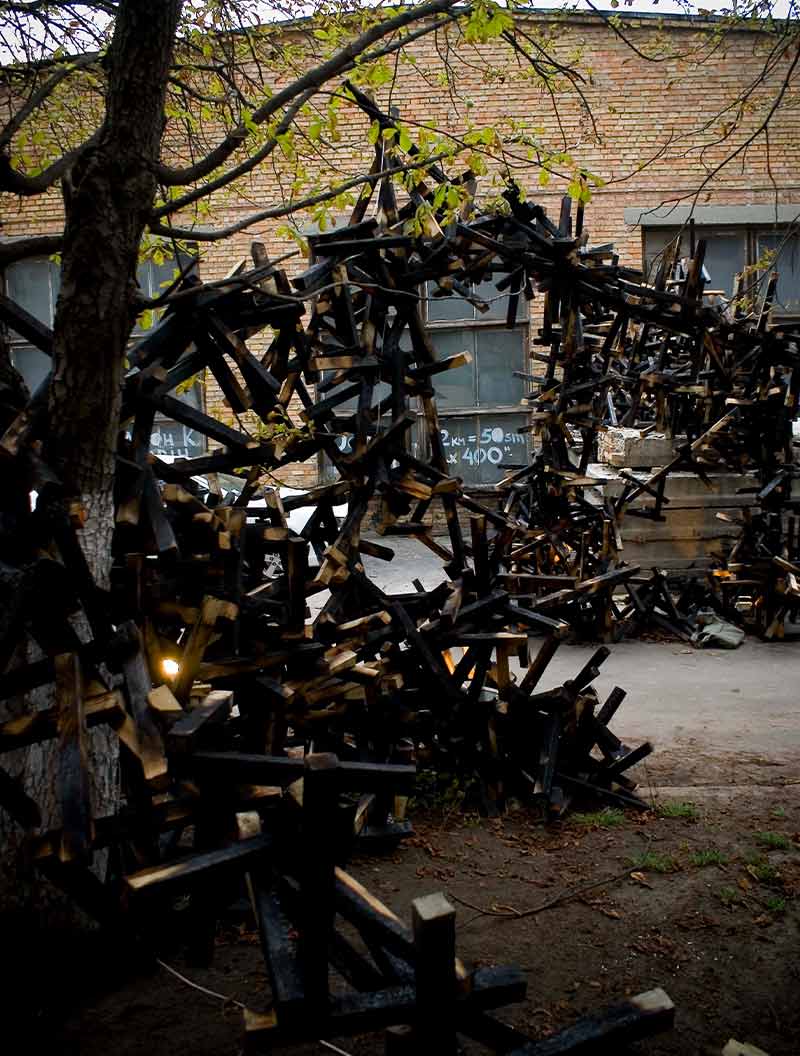 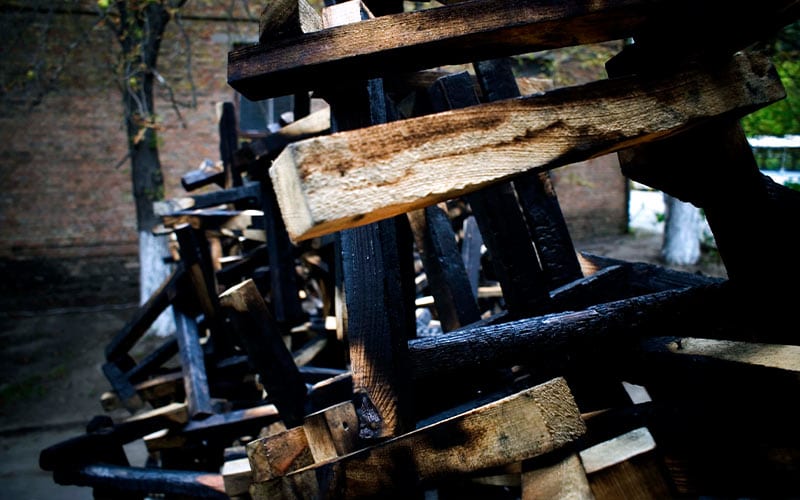 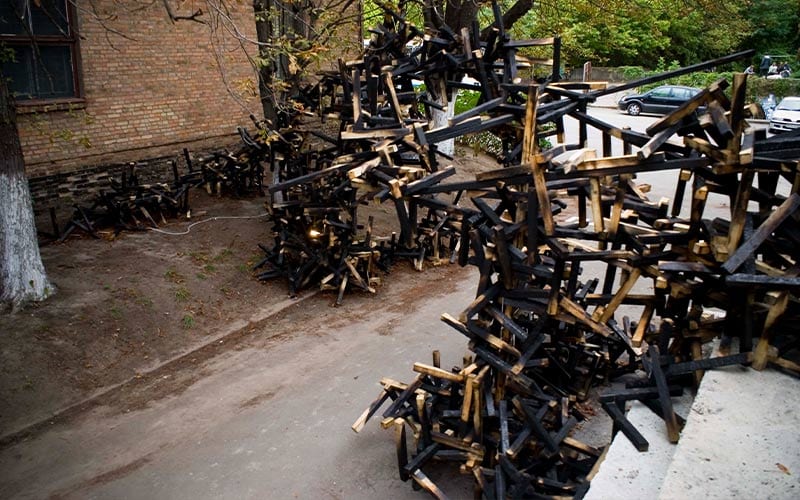 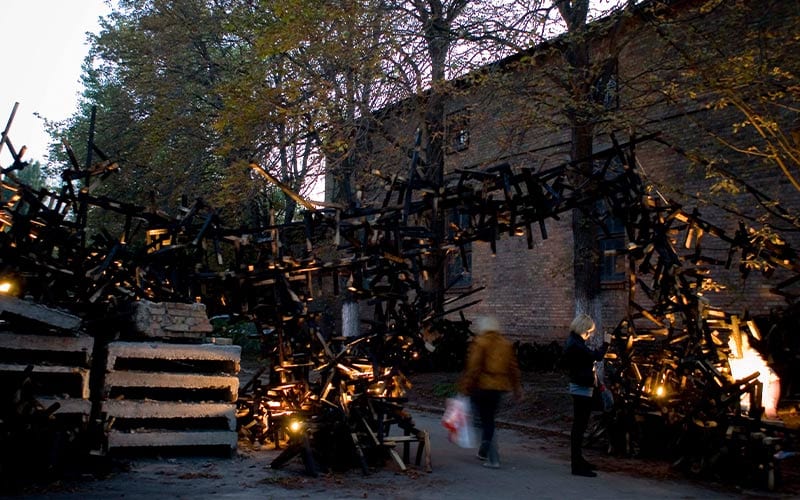