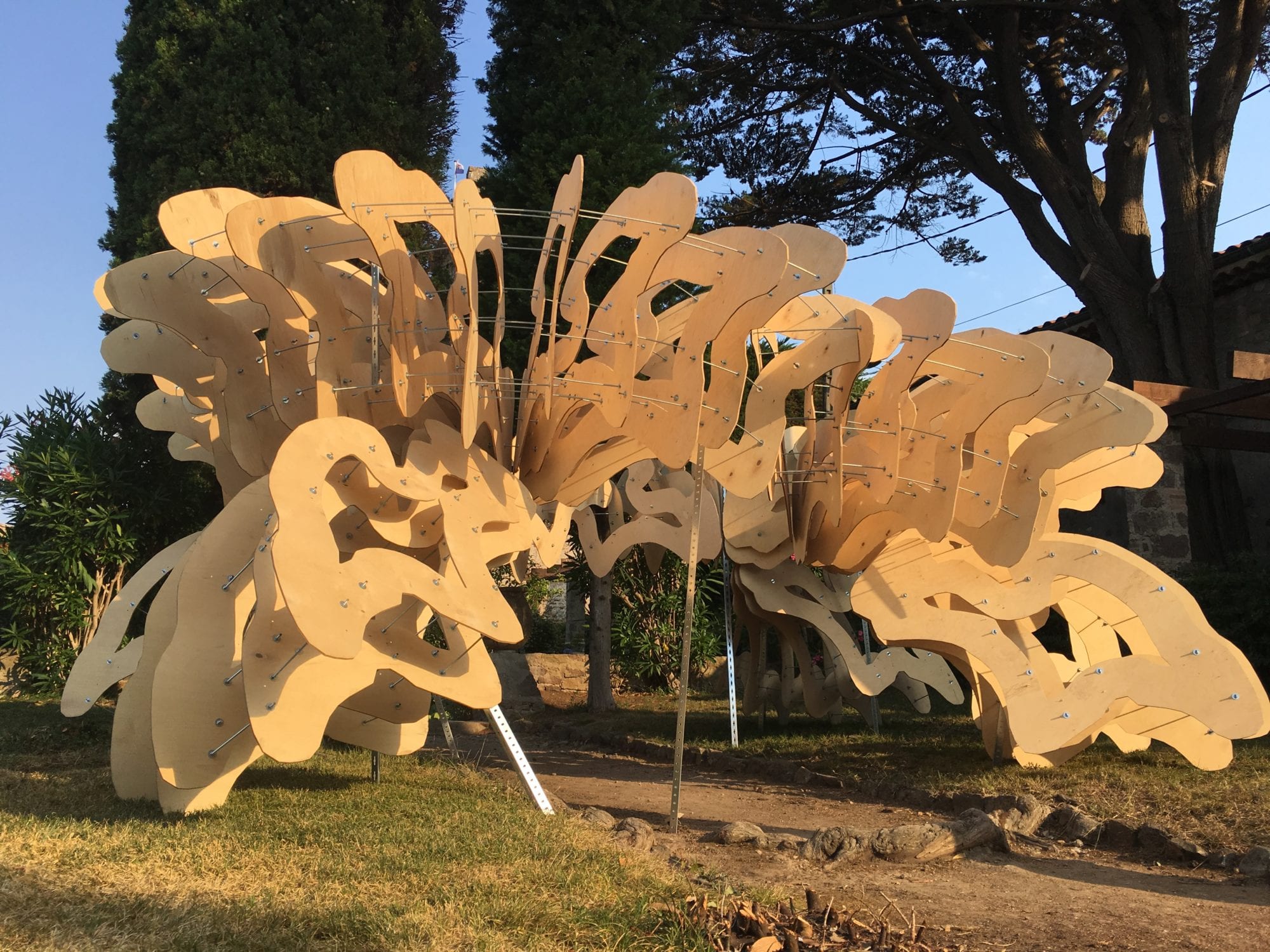 I fell in love with Côte d’Azur the first time when my Mom met up with me in winter 2005 while I was working in Pont Aven, France at the Pont Aven School of Contemporary Art.  Winter is a hard time to see anything and fall in love, but I was drawn to the region right away.  It took me 10 years to get back and even then it wasn’t sure. 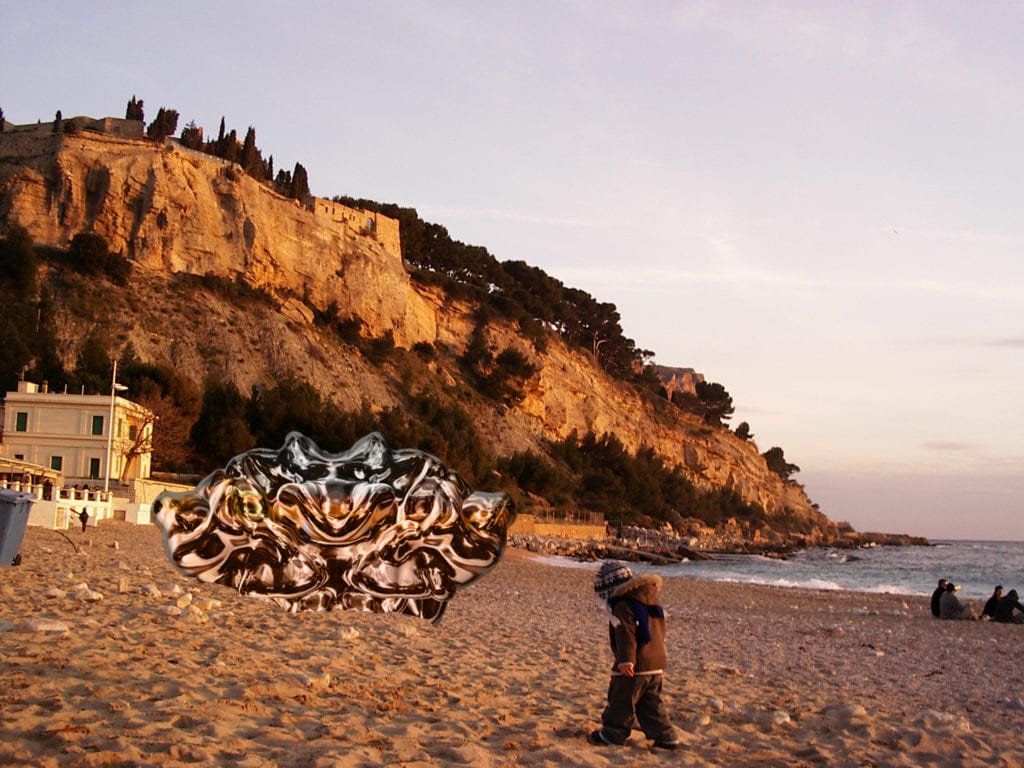 Above is a rendering/mock-up of the work I proposed when I first applied to La Napoule Art Foundation in 2015 when I was trying to be accepted into their artist in residency program.  I wasn’t sure I’d get it and had low expectations.  But that spring, I got an email saying that I’d been wait-listed and would be told soon if I could go if another artist cancelled.  I was on a cloud.  I continued my day-job of art-handling in Seattle at Artech while  dreaming of being somewhere else.

It all happened at once.  Concurrently I had been brainstorming with a colleague in Ukraine to get me back to GogolFest for another commission as well as some friends in Italy for a land art project, when I got an email from Napoule saying that I was admitted to the fall cohort.  In the same week, the US Embassy ok’d the budget for Ukraine, and my Italian contact green lit his support for my participation in his Land Art Biennial at Campi Flegrei.  I kinda flipped out with excitement.  My residency that fall at Napoule was mind-bending and opened a new world for me.  I made a lot of work and met some amazing fellow artists, some more than others, that educated me more than I could have imagined.  You can see what I did here, on my other blog. Towards the end of the residency I asked the Director and Administrator if it was possible to come back and make a more substantial project.  It was a long shot, but I wanted to ask.  At first, they didn’t respond and I was convinced I had been too bold, so I pinged them, then, they responded.  They asked me to come back for a commissioned residency for a site-specific exhibition in their garden for the spring of 2016. Always follow up…always. 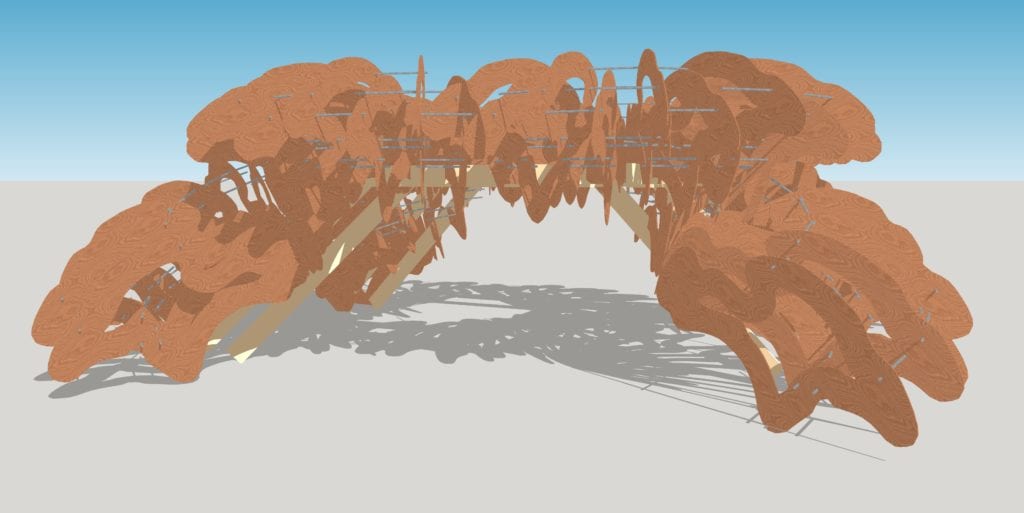 As the year filled up for 2016, including a solo exhibition in Naples, a residency at Jentel, and an a solo exhibition at The Bascom, we squeezed Napoule right into early Summer.  It was phenomenal.  It was outside of their normal residency season of fall and spring, so the only residents were Gwen Stefani and a few friends, as the Château hires out its grounds for special events, along with some semester abroad students traveling around Europe, spending a week in each location.  I had the Château mostly to myself.  I had designed the project over the winter and we had the plywood shapes CNC produced in Germany.  All the materials were staged to arrive just as I did, or a little before. 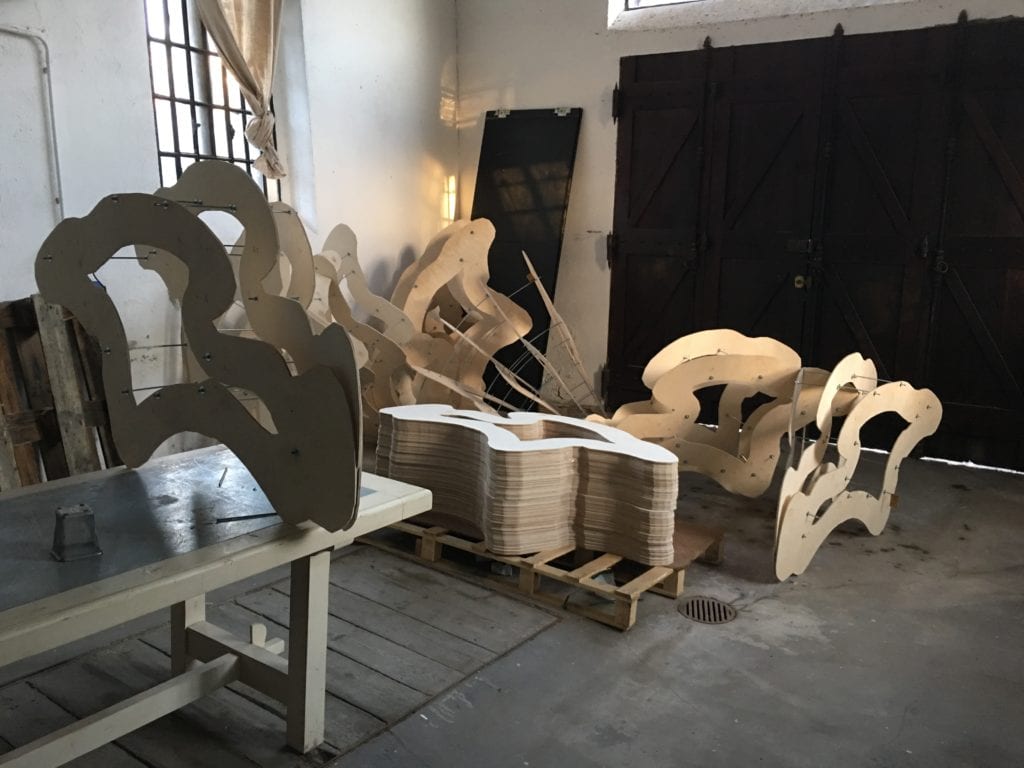 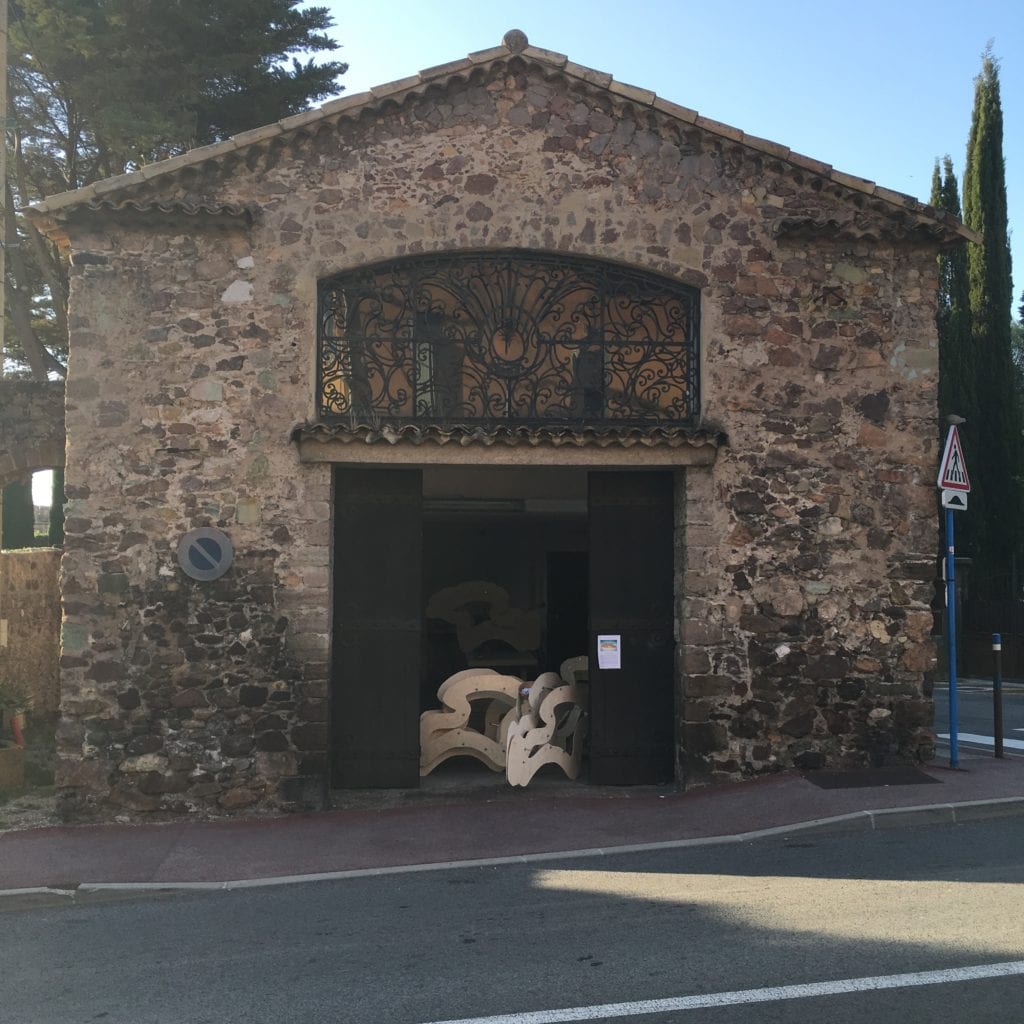 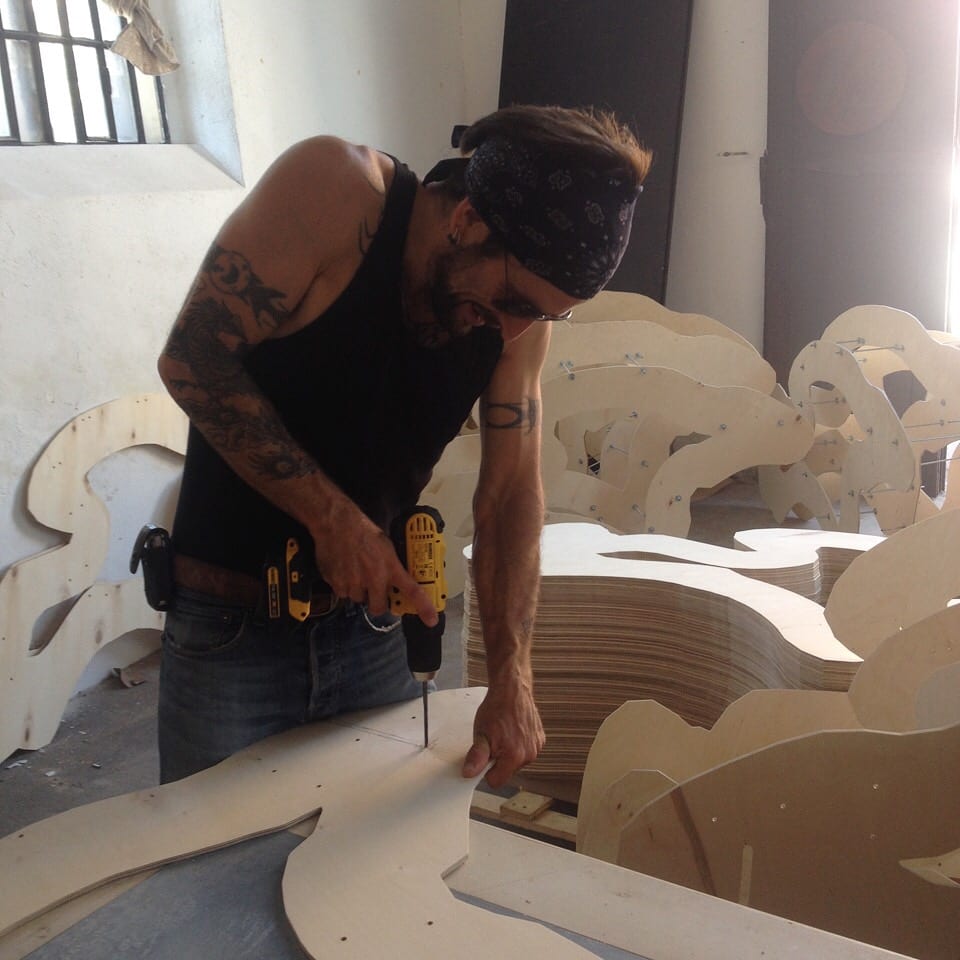 I spent about two weeks pre-fabricating as much as I could, as the garden was hired out, when the director told me I had a choice.  I would have to delay my stay or speed up installation. 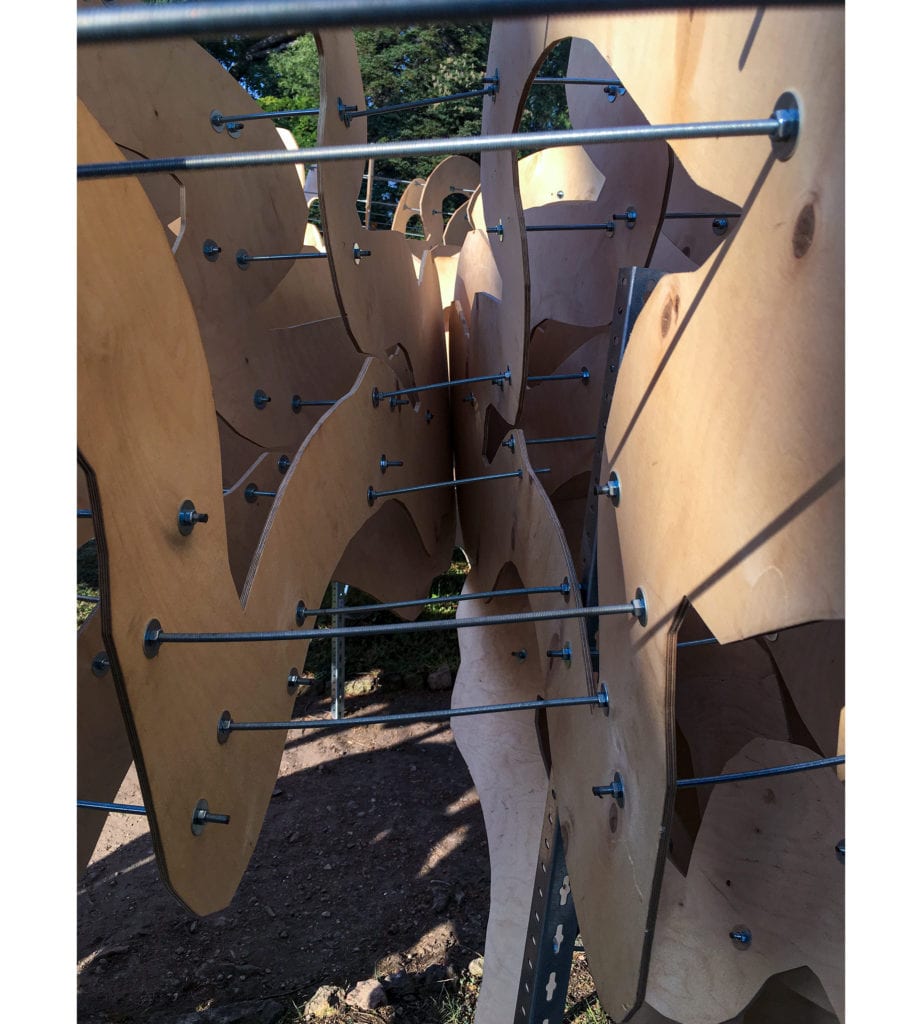 A large family had hired out the entire grounds for a luxury weekend fantasy wedding, and I would need to be invisible during their weekend.  They didn’t have a problem with the art being there, it was just a matter of logistics, I couldn’t be in the garden the same time as them.  So I decided to finish early, as early is on time.  Even though Portugal went on to win the UEFA EURO 2016 tournament, it was still nice to finish installation the same day that France won the match with Germany, so the installers for the private event lit EvoCrawler for fun.

The Vernissage followed and we were blessed with some great press that put a positive light on current events. 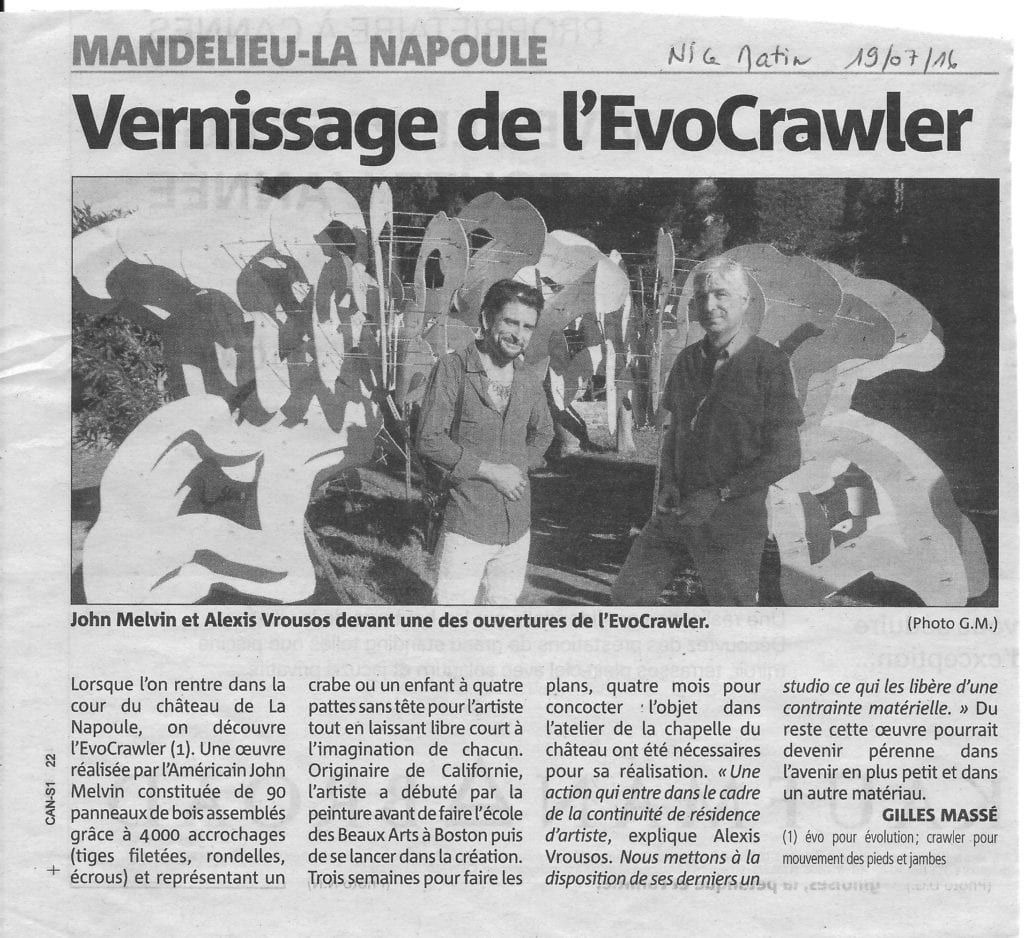 Tragically the scheduling for the vernissage of the EvoCrawler fell right after the tragic news of the terrorism in Nice that happened on Bastille day, the second in a number of high-profile attacks in Paris.  I’d actually been in Napoule in 2015 during the Paris attacks as well.  Myself, the director, administrator, and the staff of La Napoule all decided that we must go on.  Life had to go on. 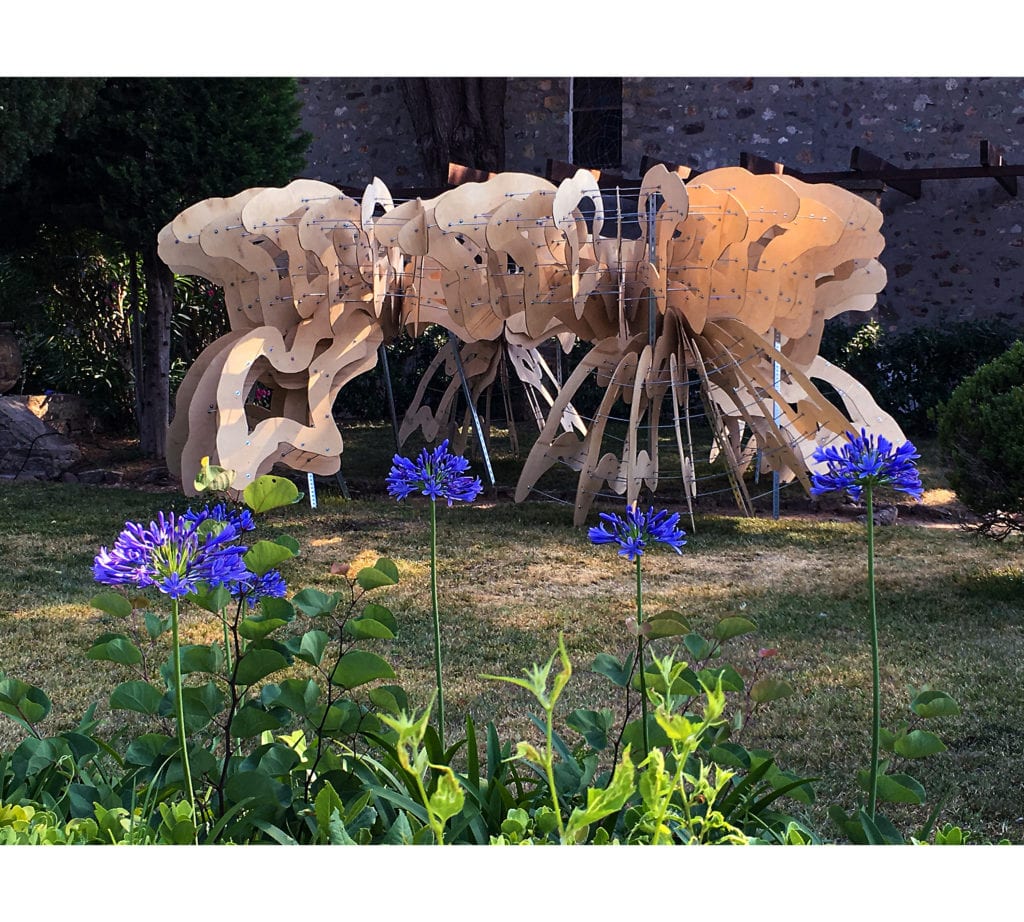 We would not be driven by fear to put out the light that art and culture can bring to the world.  Our message was peace and hope learning from our past.  So we had a very somber vernissage of the sculpture, and it stayed on view for several months until natural elements took over.  Art is about the future as much as it is about the past and present.  We have to do better. 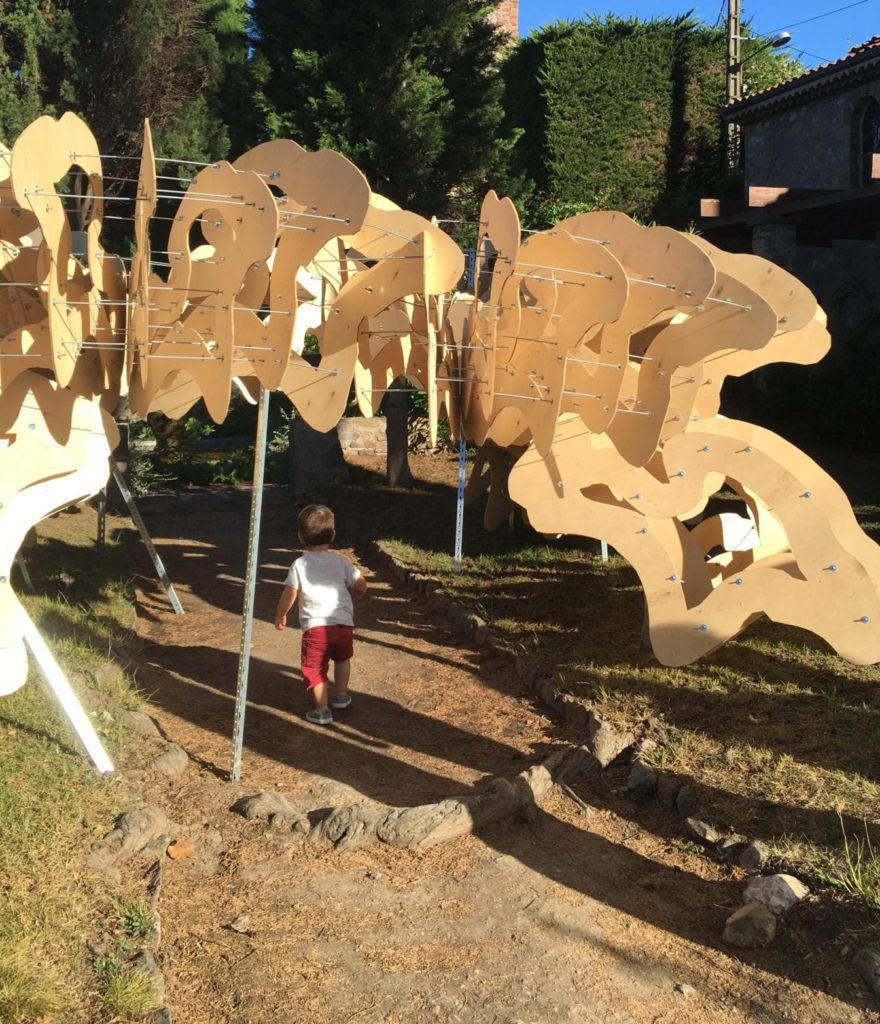 The piece was inspired by our position in the Anthropocene.  We are here, but not here, and we don’t know where we are going.  EvoCrawler has a Janus like appearance, with faces seemingly facing all directions at once, preventing it from moving in any one direction.  A metaphor I play on our contemporary moment.  I’ll always love this piece, as it has a lot of emotions and experience tied up in it.  It was a remarkable experience, and am forever thankful to the La Napoule Art Foundation for making it a reality.

The Director of the La Napoule Art Foundation, Tonya Quinn, had this to say about my time there, “During his month-long, La Napoule Art Foundation international artist residency, John Melvin proved to be an outstanding artist and human-being. John manages to question and push boundaries in a way that opens minds and hearts. As an outstanding artist during his residency, John was invited back to live and create at the Château de La Napoule exhibiting his Evo Crawler sculpture in the Château gardens, which not just delighted but also stimulated lively discussions with visitors of all ages and nationalities.” 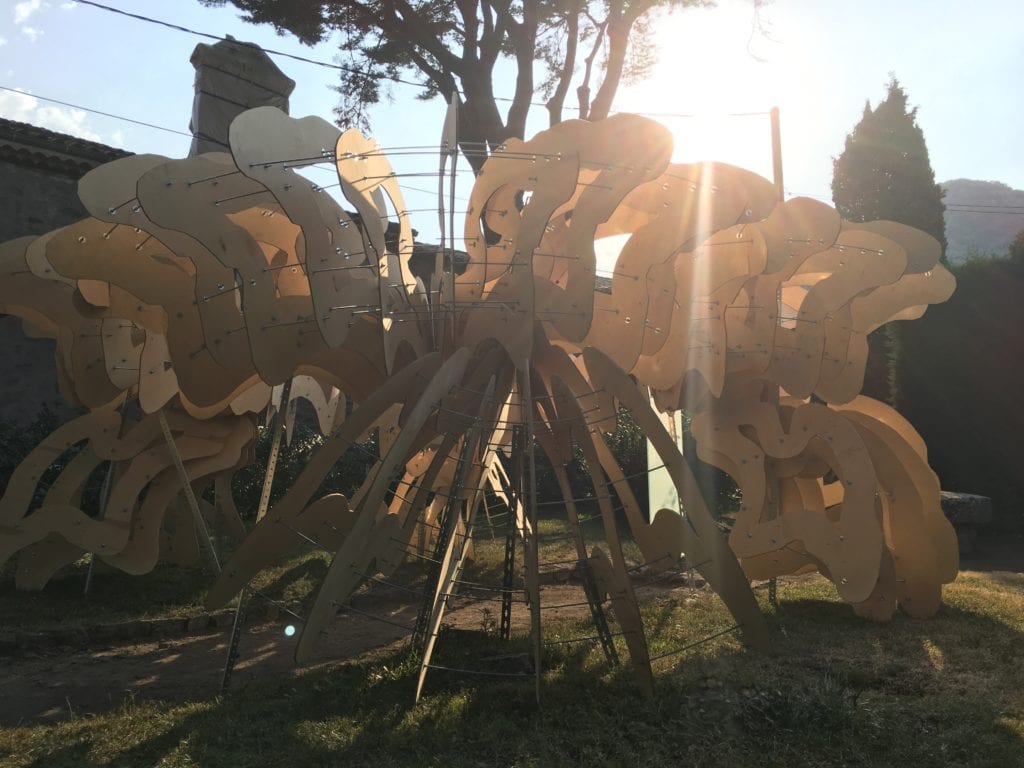 I’m continually impressed with how no matter what I think the challenge is, or what life throws at me, as long as I can believe I can do it, I can.  It is truly that simple.  I’m forever thankful to family and friends that make this a reality, without their support and the incredible support of foundations like La Napoule Art Foundation, artists would be hard pressed to make a contribution to the world. 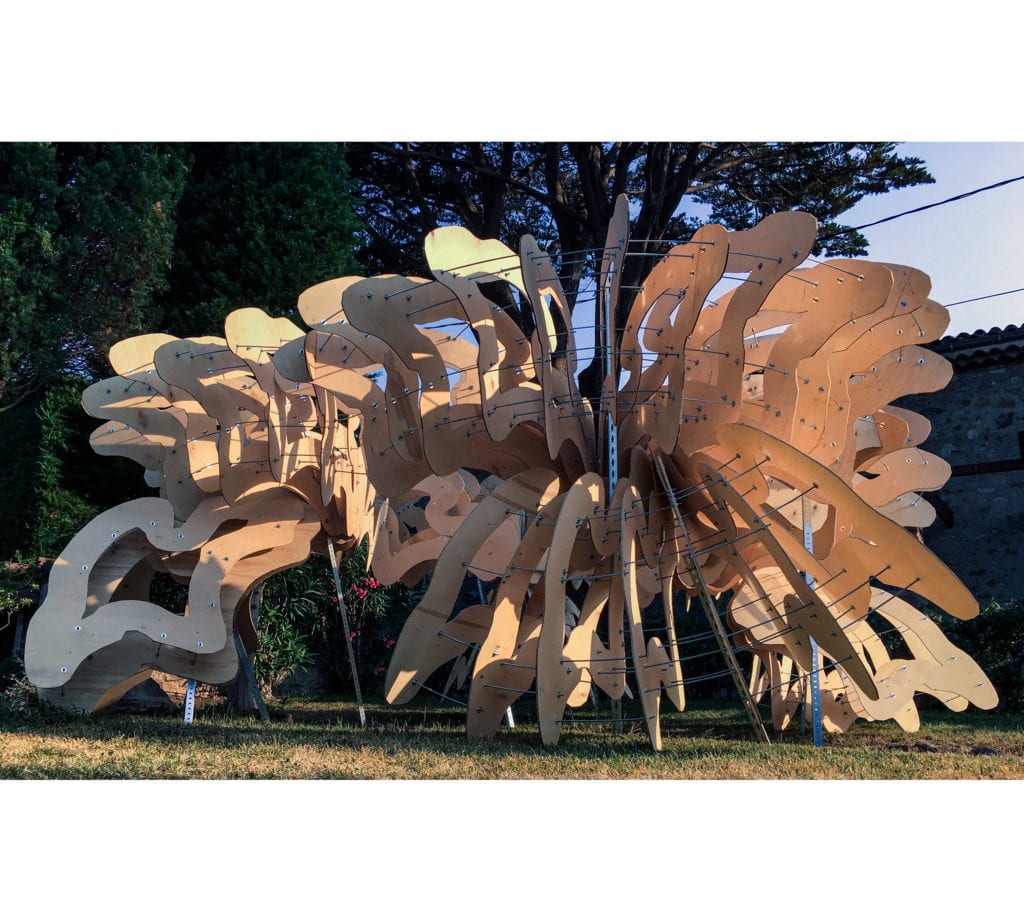 I do believe that we are doing something that makes the world better.  Many think that is naive, but I think its only because it is so much easier to be negative and that conversely, it requires exponential amounts of work to be positive, proactive, and creative. 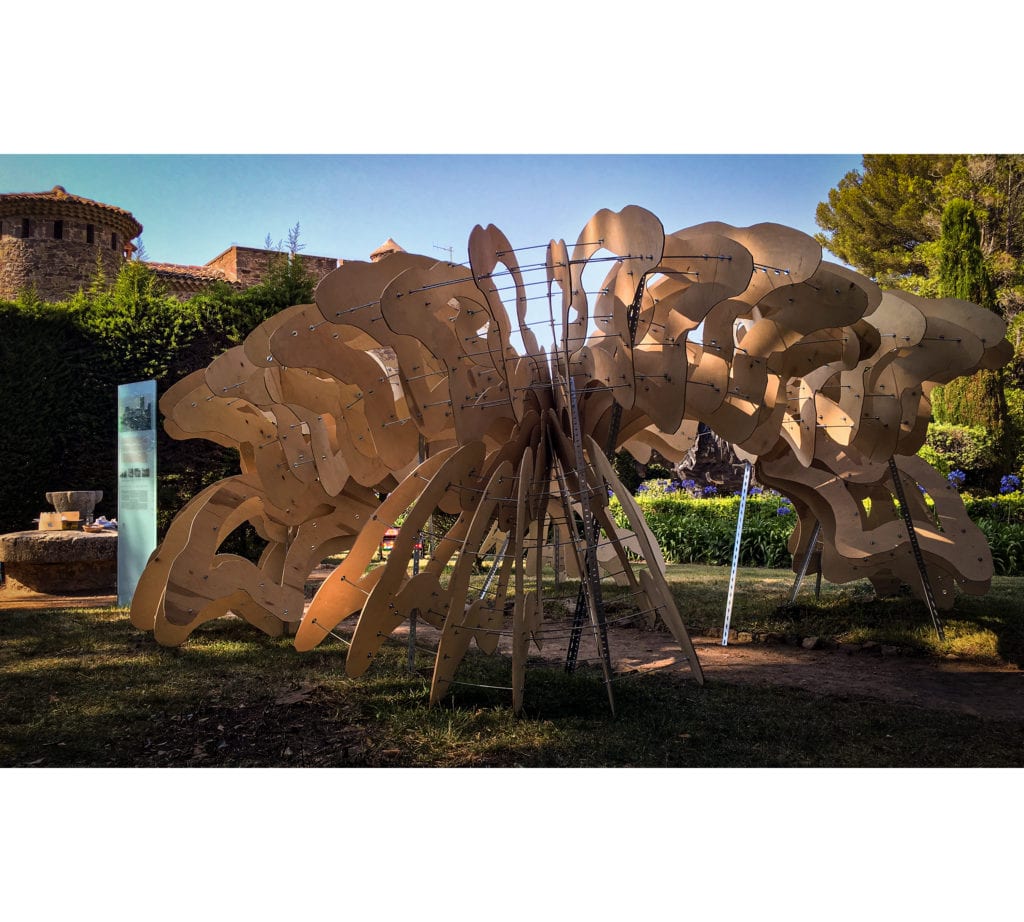 Thank you all for the support.  Below is a panoramic I shot on my last days in Napoule when I found a trail that climbed a very tall peak overlooking the entire bay.