It is what it is…”Colorado has no recycling program.  Farmers using drip tape are forced to bury, burn, or store the material on their property or pay for the time, transport, and tipping fee at the local landfill.” 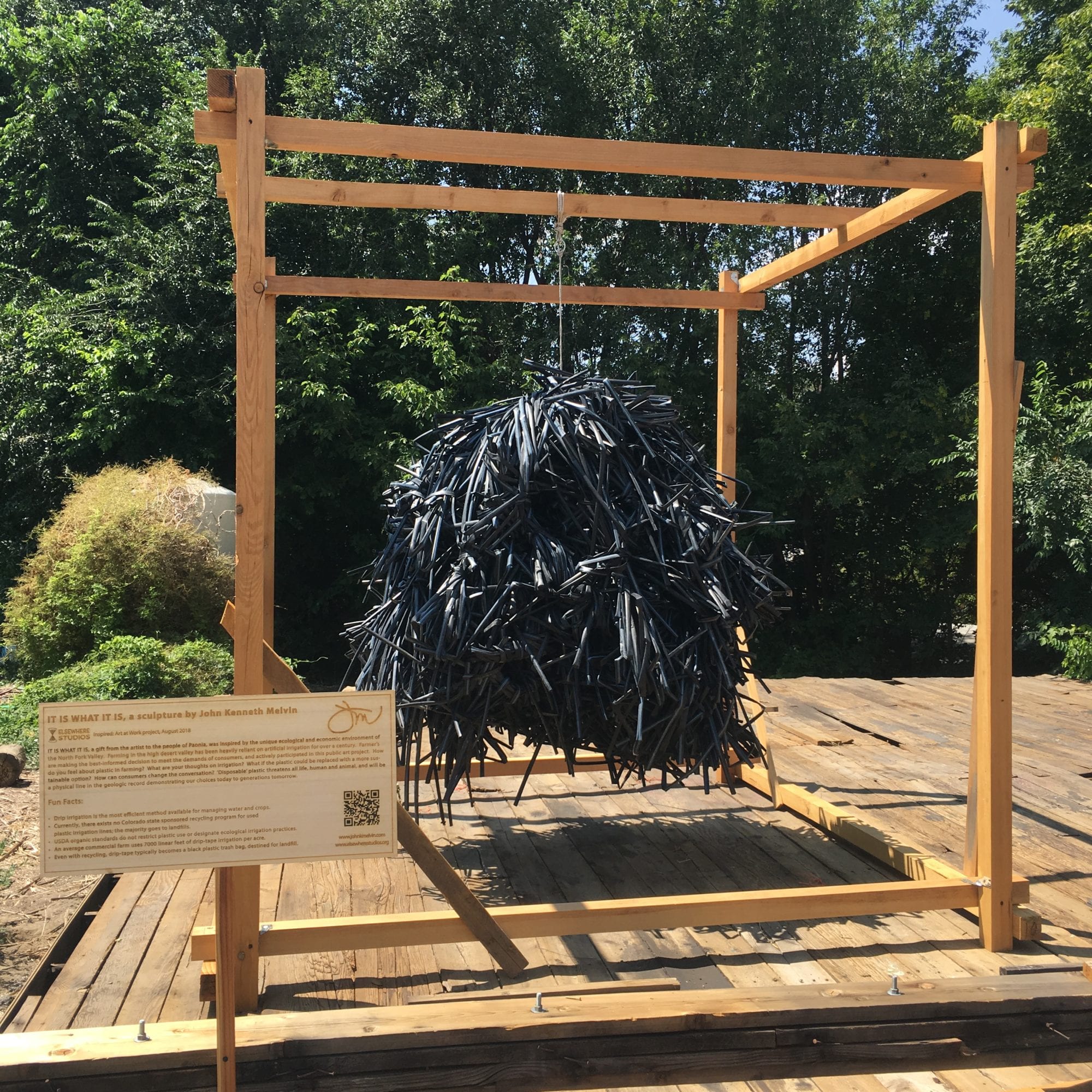 I was accepted into an Arts & Society funding program managed by Redline Contemporary Arts in Denver and manifesting in Paonia Colorado at Elsewhere Studios Artist Residency with their Inspired Program.  The award was granted in 2017, and the project was completed and installed the summer of 2018.

Invited artists were tasked with community engagement through public art and social practice.   The organizers at Elsewhere Studios were pleased to have secured their first major project grant, and felt they were entering a new era of their institution.  I was thrilled to be in residence with some amazing artists as my tenure spanned three months where the “Inspired” program of 5 artists would overlap with a normal residency cohort of 6 artists.  The Inspired Program consisted of  two international artists, myself and Anna Macleod, and three local artists, Clara Pena, Tanya Blacklight, and Christina Palafox.  It was going to be quite a summer.  Here’s a Redline Center news release about the grant award. 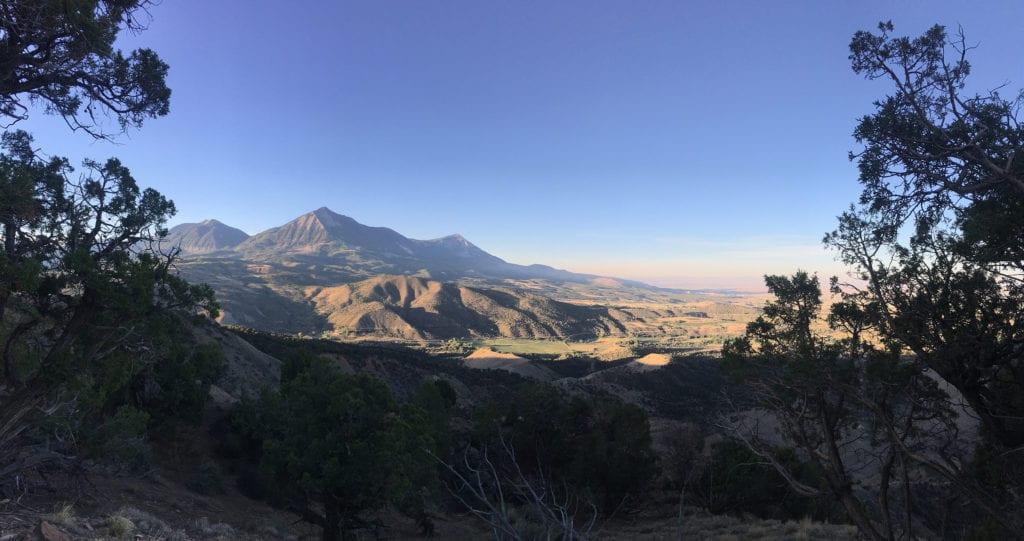 Paonia, Colorado is situated in the midst of Delta County in the western slope region of Colorado.  Its all originally Ute Tribal lands, but the Utes were pushed out 200 years ago through aggressive treaty negotiations that whittled their lands to nothing.  Pictured below is an image I took at the the Ute Indian Museum in Montrose, Colorado, and it documents the process through which native lands were reduced to nearly nothing. 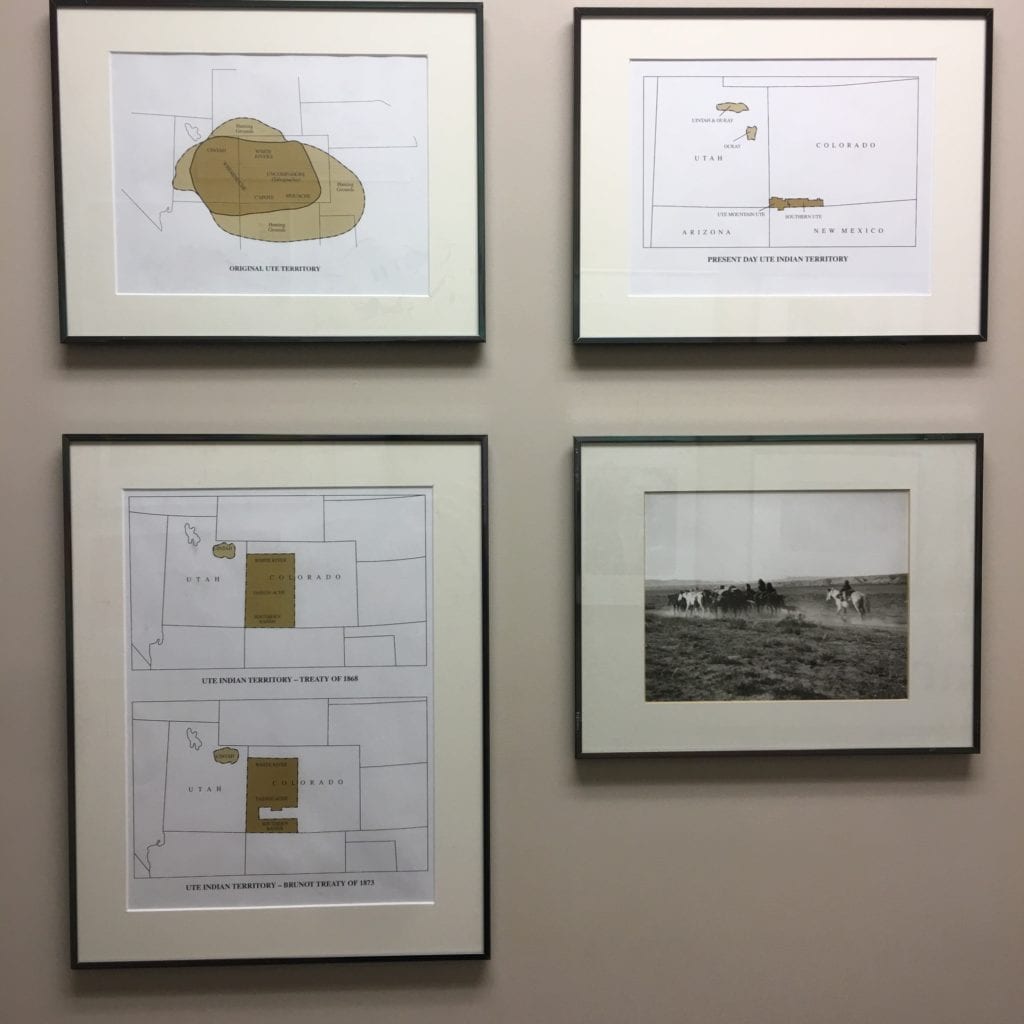 Since that time, western expansionists created a vast system of irrigated farmland.  The land is naturally arid.  The settlers used the irrigation network to create lush and thirsty orchards, croplands, and hay-fields for livestock.  The irrigation ditch network, or ‘ditch’, was organized on seniority and some families can trace their ditch ownership to the first settlements.  This meant that new farmers are’low-ditch’ and often have little to any say over the water rights to their land.

The area is now under serious threat from extraction industries, fracking, and other developers.  Western Slope Conservation Center has an interactive map that allows users to access a wide range of information.  Refill your beverage and head over there to spend some time learning about the region.

Why am I providing so much information?  Why is this important?  Climate Change is the social justice context of our reality.  Simply put, a farming community basking in the shadow of retreating and disappearing glaciers is catastrophically confronting reality.  At first I wanted to create a public art sculpture that would be a place-making strategy, but when I researched and infiltrated the community and discovered ecological contradictions, my work focus shifted.

I was inspired to act when I found that the organic farmers, many are mico-farms or truck farms, a few acres or less, were all relying heavily on single-use plastic irrigation drip tape or line.   For the small farmers with limited funding and low-ditch water rights, plastic is their only choice.  Yet, there was no recycling option for them.   I contacted about 200 organic farmers, about a dozen responded to me, and ultimately I went out in a truck and collected used drip tape from 6 farms.

This is a story of trial and error, and the monumental difficulties of waste management in the Anthropocene.  Colorado has no recycling program.  Farmers using drip tape are forced to bury, burn, or store the material on their property or pay for the time, transport, and tipping fee at the local landfill.

As part of my practice I contacted a Delta County Commissioner and had extensive conversations about the need for the community to have a solution.  I introduced to the county an industry contact, DELTA PLASTICS in Arkansas, that I had found who was willing to drop off a semi-truck trailer and collect when full for recycling in his company’s home state of Arkansas, for a significantly reduced fee.  I voluntarily continued this coordination for a year after I left Paonia.  In spite of concerted efforts by myself and Delta Plastics over the course of a year, to date, there has been no progress.

The sculpture I made was intended to be confrontational as was the brief performance I made through the center of Paonia.  The sculpture stayed on public view for nearly a year and the plastic was disposed of in accordance with the county rules.  Pictured below is the custom sign I made and installed on the sculpture in public view. 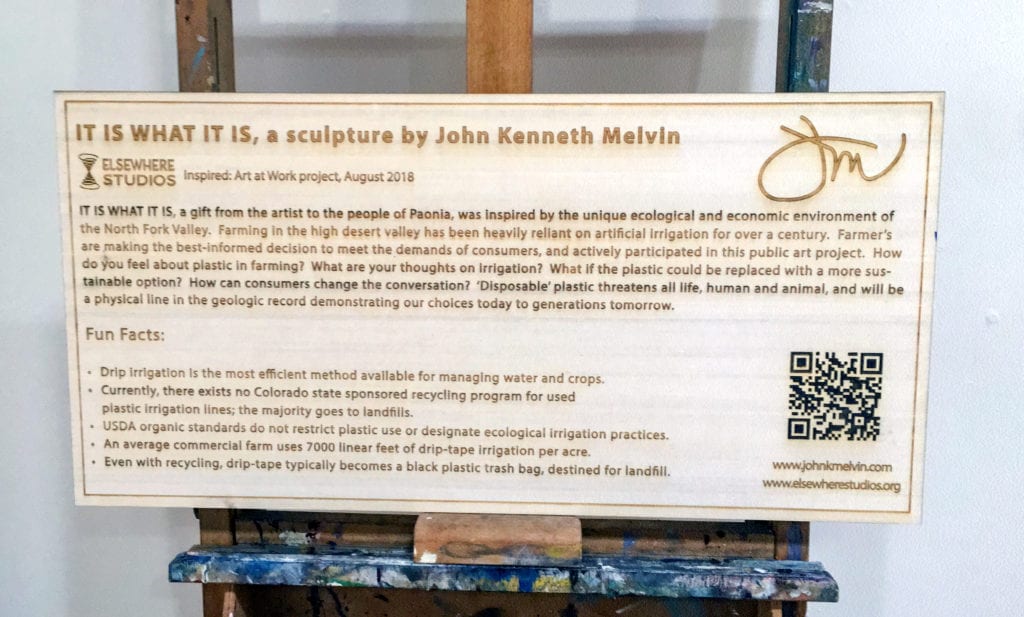 I am incredibly thankful for the people that I met.  Most of all, Anna Macleod for who’s friendship I will forever be thankful for, our nightly rant sessions provided an eco-artist camaraderie I will always treasure.  Regina WhiteSkunk, Ute Tribe Leader, I am forever in your gratitude for your friendship.  A sincerely heartfelt thanks goes to the entire team at Elsewhere Studios spearheaded by Karen Good and Deirdre Morrison, a dynamic duo that managed the complexities of the Inspired Program.  Artists need funding, we can’t do what we do without it, and thanks to Redline Arts, NEA, and many more, we did it, so thank you.  Here’s a link to my tumblr blog where you can see a journal of all the posts I made while in Paonia.  Elsewhere Studios organized a symposium that hoped to engage the public in dialog about how art and society could work together to solve ecological challenges.  I did a talk that covered a lot of talking points, and is about an hour, you can watch it here.  A lot of topics were brought up, from “Slow Money” with Woody Tasch to “Climate Justice and Forensic Architecture” with Brianne Cohen.  The time went by all too fast and I’m not sure if we accomplished anything, but I think the conversation is started and continues. 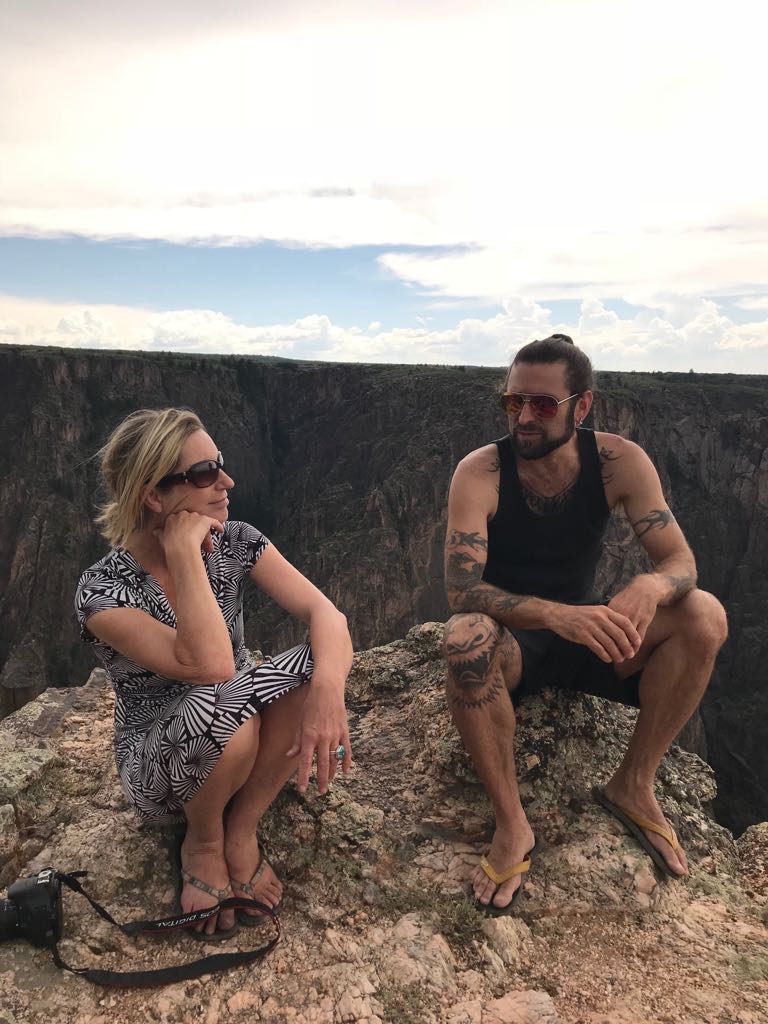 Climate Change and its effect on our economies and communities is happening now.  Its happening globally and in your backyard.

It is not in the future.  It is here.  We need to apply better science and more sustainable technology to our farming industry.  Thankfully there is lots being done we just need to share the information.  Recently there has been a lot of development.  Beef production will be outmatched by emerging technology were meat will be grown in laboratories.  China and many other countries are banning single-use plastics.  The rise of algae, fish, and mycellium as economically and ecologically viable alternatives to petroleum based plastics is happening now, not later.  These are all solutions that we can embrace immediately to continue positive development for a more sustainable future.

Denial is a form of ignorance, and one we do not have time for.

Thank you all for your continued support, as I receive updates about this project I’ll update this blog post. 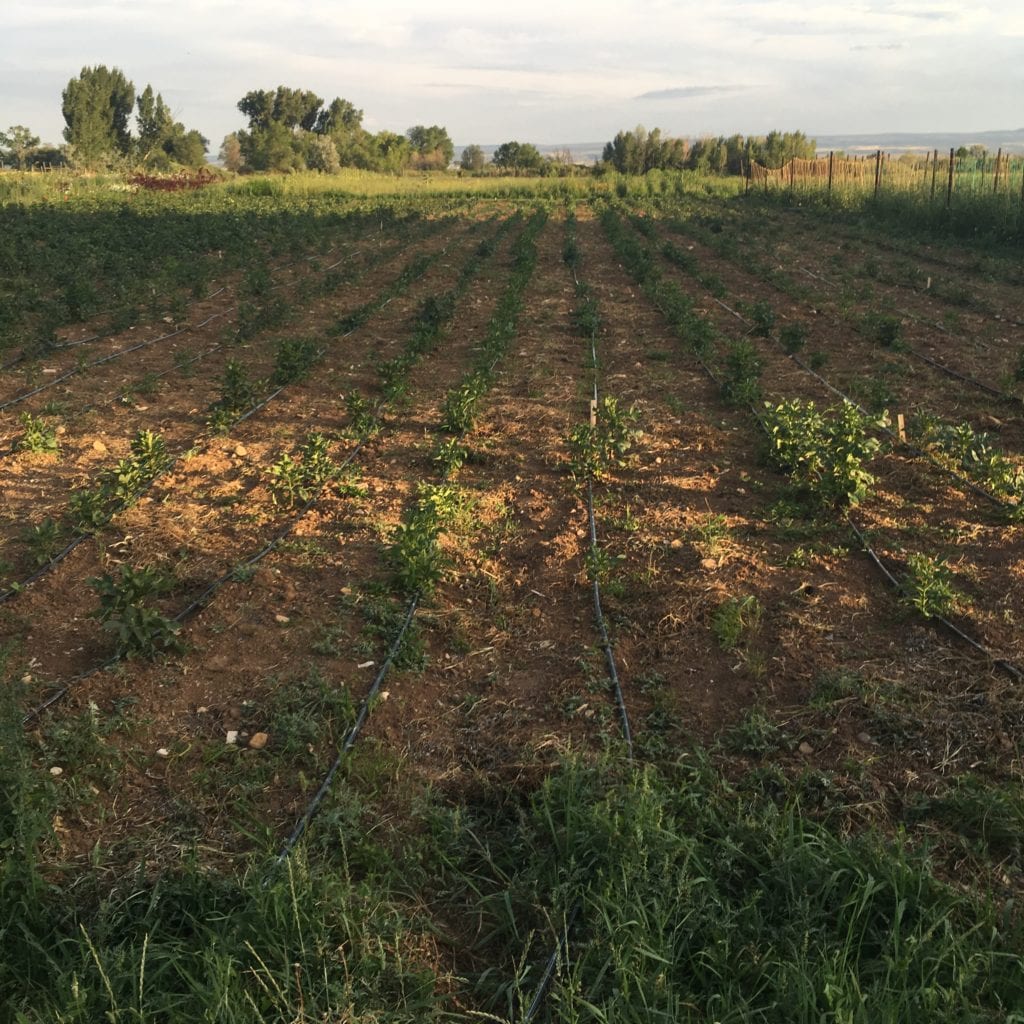