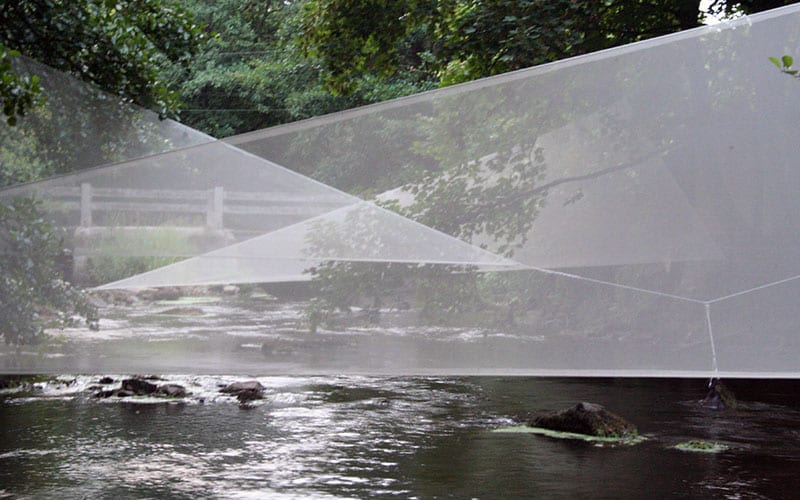 In 2005, I was awarded a 15-week fellowship to Pont Aven School of Contemporary Art in France. While making installations in the surrounding fields and buildings, rumor got out that I had an idea for the river. On completion of the fellowship, the school director, Caroline Boyle-Turner, offered me a position of teaching assistant and printshop manager so that I could focus on developing the Aven Project.

I was deeply attracted to the river, L’Aven. I saw it as the namesake of Pont Aven but also as an organic chronologist of the town’s history, from mills, to lavoirs, to modern day artists capturing its essence and drama. I was struck by how the years of human manipulation of the river and town, had erased the possibility of linear observation of the river without simultaneously incorporating a fractured experience of the town. Humans have altered every landscape in which that live, and Pont Aven is not alone in this experience.

I was driven to create semi-transparent scrims that would simultaneously alter, reflect, reveal, and conceal viewpoints, architecture, and landscapes as they marched along the river. During a year long process, we managed to get permission from the town mayor, 40 private property owners, materials sponsorship, complete design/engineering/site-survey, all scrims sewn by my father and I, and we also raised a small cash budget for a catalog, dvd, and logistical support of the project via fiscal sponsorship from the Chaney Foundation in Carnation, Washington, USA. Of the 20 people who worked on the project, nearly all were volunteer including me, and only a few were paid staff of CIAC-Pont Aven, or the Pont Aven School of Contemporary Art. My family, close friends, Kayak 360, and the interns of CIAC were critical in aiding the project. We held numerous workshops, seminars, presentations, and community engagements, such that by the time it was installed we had an amazing amount of support from the town.

In all, 29 scrims, like the departmental number of Finistere, many as large as 10×10 meters, marched from the Bois d’amour to the Pont of Pont Aven in Centre Ville. We had plenty of press(link), good and bad, an article for Sculpture Magazine written by Ann Albritton, and we exposed the project and companion solo show of drawings and prints at CIAC Gallery to the 3000 residents of Pont Aven, in addition to the 3000 or more tourists that pass through the town in the summer. The film was fortunate enough to get some interviews on the spot of people’s first reactions to the project. The project was only temporary, as we wanted to preserve and highlight the landscape of Pont Aven. Many stories are related to the project, and too many for this post, but a deep inspiration for me as an artist was when I learned that because of the project, many in the town had renewed their passion for art and the town. One story with even more personal impact, was that many of the inhabitants, because of up-stream agricultural pollution revealed by the project, had gained an increased environmental awareness for their region and country. This link between art and activism then became the corner stone of my artistic practice today.

For several years after, I have been asked to make similar projects, permanent or temporary. Sadly, global economics had their impact on the art world almost catastrophically, beginning with the 2008 financial crisis and persisting thru 2011, and subsequent offers were shelved. Its my hope that someday, the opportunity will arise to make another similar project that can engage the public in a conversation on the meaning of place, and most importantly, the health of our environment, without which, we are lost.